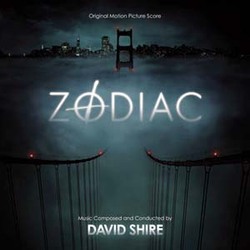 The announcement that one-time A-list composer David Shire would return to high profile film scoring for David Fincher\'s study of the search for a serial killer, Zodiac, was enthusiastically greeted by those disaffected with the modern film scoring culture. And the results as presented on this forty-minute album from Varese Sarabande must surely validate that enthusiasm. In keeping with the film\'s disciplined docu-drama style, this is austere music for a psychological drama filled with horrific possibilities, puzzles and irresolution. It\'s not a film that uses music wall-to-wall, but far more strategically, as evidenced by the variety of compositions on display here. (And what better comment on the uncritical application of underscore in modern film scoring that it\'s unusual for a major film to have only thirty-four minutes of underscore? How many classics of the early seventies had less than that? Goldsmith\'s Patton and Shire\'s The Conversation are two of the greatest that come to mind.)

Perhaps what marks it most clearly as a score by David Shire is not the distinctive chamber ensemble sound – string orchestra with trumpet, piano and other soloists – nor the composer\'s evident comfort with atonal composition (this from the composer of Taking of Pelham One Two Three), but the very clear conceptual basis for the score, with references to his own classic score for The Conversation, and more significantly, the Charles Ives tone poem "The Unanswered Question". (The latter piece is probably incidentally familiar to film score fans – its most recent filmic appearances include The Thin Red Line and Run Lola Run.)

The slow deliberate dissonance of the string section renders the various "Aftermaths" of the Zodiac\'s crimes with existential dread. That first album cue is actually an edited combination of the cues that follow the three known murders the Zodiac commits in the filmic narrative, a combination that works well for dramatic effect. (All the killings themselves are unscored – and more than one counterpointed with unsympathetic atmospheric sound effects and incidental source music, the latter including a chilling placement of Donovan\'s "Hurdy-Gurdy Man".) For the murder at Blue Rock Springs, violins slowly set out a bleak melody for the Zodiac. For the subsequent attack at Lake Berrysea, a polyphonic drone for strings reminiscent of Ligeti caps off a strangely matter-of-fact killing scene with an overdue sense of horror. And for the Presidio Heights murder, the violins return with the Zodiac melody as police (unwittingly) investigate their first real Zodiac crime scene. These ideas are reprised in "Law and Disorder", with shorter references in other cues.

A trumpet motif reminiscent of the trumpet "question" from Ives\' "The Unanswered Question" debuts towards the end of "Aftermaths" as Mark Ruffalo\'s character (Toschi) enters the story. Shire uses the motif to discretely shade Toschi\'s failed investigation with an air of nobility, also employing the motif more generally as a taunting reminder of the unresolved identity of the Zodiac. Even when another character believes he is looking into the eyes of the killer – "Confrontation" – an ominous reprisal of the trumpet motif over droning strings both serves that character\'s sense that he has found the culprit, while also reminding the audience that definitive knowledge is impossible. The Zodiac remains an unanswered question, and a life devoted his capture is doomed to irresolution. The latter usage feels particularly appropriate in light of the conscious reference to the Ives piece. (The string backdrop to the Ives piece appears here in a far more dissonant form more appropriate to the story at hand – though occasionally the serene sound of Ives\' "silence of the druids" appears – e.g. "Confrontation". The woodwind quartet "answers" from the Ives\' piece have not been incorporated into the score.)

The music moves back and forth between the larger texture of dissonant strings with solo trumpet and more intimate solo piano melodies. "Graysmith" introduces the fairly neutral theme for the Zodiac\'s most dogged amateur pursuer, perhaps the score\'s most transparent reference to Shire\'s solo piano score for Coppola\'s The Conversation. (The temping of Zodiac by sound designer Ren Klyce with material from Shire\'s classic score was what led to the composer\'s involvement.) The comparison is imperfect however: Graysmith\'s theme is an altogether unenthusiastic melody for a lonely solo piano that would seem aleatoric were it not for its repeated appearances throughout the score. Appropriately, there is little of Harry Caul\'s jazzy waltz theme left, as Graysmith shares with The Conversation\'s hero one facet: the capacity to isolate himself from the world. The theme is showcased in a number of tracks - "Graysmith\'s Theme" for piano and Ivesian string counterpoint, and "Graysmith\'s Theme (for piano)". As well the theme is carefully integrated into the larger orchestral textures of other cues – note the nice transition from the extended rendition of the trumpet motif to Graysmith\'s theme towards the end of "Avery & Graysmith, Toschi & Armstrong".

I suppose what really grips me about this score is that Shire had an opportunity to do something that largely employed fairly generic droning, but went a lot further to lend each cue unique musical identity. (David Julyan\'s The Prestige score seems a likely counter-example here – as effective as that score was in context, were it not for the excellent film, the music would have few fans.) The Zodiac theme itself never seems to recur in exactly the same form – note the solo piano reading of the theme in the latter half of "Are You Done?", with arpeggiations on some of the chords hinting at the mental torment the Zodiac inflicted on the protagonists. Another interesting twist on the material is "Trailer Park", where an electric guitar with heavy vibrato outlines a twelve-tone melody as police search the house of a potential victim. (Twelve tones = twelve points of the Zodiac.) Different string sections enter, eventually providing a reprise of the Zodiac theme as their search is interrupted by the return of the suspect.

Perhaps the best cue of all is "Graysmith Obsessed", an allegro rich in skittish pizzicato and piano runs, and sharp string strokes. Shire has claimed the cue was inspired by John Adams\' brand of minimalism – "maximalism" – though certainly to those whose ears rarely stray from film music, it will seem like a most buoyant kind of minimalism compared to the more familiar efforts of Philip Glass and Michael Nyman. This style of writing enlivens Fincher\'s very exposition-driven film to no end, and deftly utilises the Graysmith and trumpet themes throughout its course. This style briefly returns in the opening of "Are you Done?", and appears in a more Herrmannesque form in the violent resolution of "Closer and Closer" for one of the scenes where suspicious signs cause one character to take fright at an apparently innocent man. ("Closer and Closer" is another cue edited together from several others – a fortunate decision for the album.)

And there are bonuses too. Shire has commented in interview that the melodic "Toschi\'s Theme", with its ascending minor key leaps and tragic nobility, was too emotionally involved for the filmmakers. Nonetheless the album presents a piano recording of the beautiful theme, a melody only suggested briefly in the score (at the start of "Closer and Closer"). It\'s a nice inclusion for the composer\'s fans, though I can see why not having the cue in the film was necessary – if only because of importance of the piano association with Graysmith throughout. (I assume "Toschi\'s Theme" was meant to be performed for piano, and was not a demo for a trumpet theme – it\'s hard to imagine the melody for trumpet.) There\'s also an audio excerpt of the discussion from Shire\'s initial presentation of ideas to (presumably) Fincher and Ren Klyce. It\'s the kind of bonus that I wish was done more often on scoring albums, though I suppose not all film-makers would come off as well as Shire, Fincher and Klyce do here.

To some this will be an emotionally oppressive album, but then it\'s that sort of film, so there should be no surprises there. It is an extremely musical suspense score – one that brings to mind recent genre highlights like Morricone\'s La Sconosciuta, Alberto Iglesias\'s The Dancer Upstairs, Desplat\'s Inquietudes and Jeremy Sams\' Enduring Love. Perhaps it wouldn\'t have hurt for a few of the film\'s source cues – including Donovan\'s "Hurdy-Gurdy Man" – to be incorporated here, but there are certain advantages to the separate release of those tracks on another album, not the least of which is that Shire\'s entire vision for the film plays in all its austere beauty.

Hopefully it will not be the last time we hear from David Shire on a major film. Undoubtedly his inclusion here owes a certain amount to the filmmaker\'s desire to achieve the sparer sound of film music from the paranoia thrillers of the 1970s, a sound that Shire advanced more than anyone else except perhaps the late Michael Small. But the strength of the Zodiac score is hardly from the fact that it hints at some \'retro\' sound. More important I suspect is that Shire is not afraid to engage the film with fairly minimal forces, emotional discipline, an intelligent \'score concept\', and some very compelling musical references to twentieth century American classical composition. Above all, he takes a fine film and makes it better – bestowing on a film rich in verbal content some dramatic associations that only music can compactly communicate. For achieving all that, this score is fantastic, and perhaps one of the few must-have film scores of 2007.