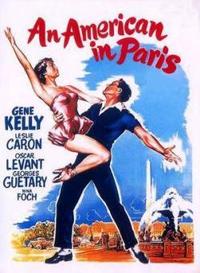 An American in Paris

(Note: Portions of this review were originally seen in our DVD-only review posted in September 2008).

In 1952, a film surprised Hollywood and swept up six Academy Awards, including Best Picture.  The film, 1951\'s An American in Paris, beat out A Place in the Sun, Quo Vadis and A Streetcar Named Desire. Loosely based on the 1928 orchestral composition by George Gershwin, Gershwin had sold the rights to the piece to film producer Arthur Freed.  Written by Alan Jay Lerner, the musical screen play was required (per Gershwin\'s deal) to only use songs from the George and Ira Gershwin catalog.  Directed by Vincente Minnelli, the film stars Gene Kelly (who also choreographed the dance sequences) as Jerry, an aspiring painter, living in Paris.  Friends with a concert pianist, Adam (Oscar Levant), Jerry is befriended by a generous benefactor, Milo Roberts (Nina Foch) - who seems more interested in Jerry than his art.  When Jerry meets the beautiful Lise (Leslie Caron), he falls for  her - but Lise is already engaged to the famous French singer Henri (Georges Guetary), who is Adam\'s long-time associate.  Soon Milo discovers that her feelings for Jerry aren\'t reciprocal, and Jerry learns that Lise does indeed love him - but Henri takes her away to be married.  Will she return? Won\'t she? I won\'t ruin it (for the few people who might not have seen the film), but the climax of the film is an 18-minute ballet set to the original "An American in Paris" Gershwin piece, as Jerry "daydreams" about taking Lise all over the city.  It\'s a phenomenal piece of choreography, both from the actors, the set design, and the camera movement.  It helped rejuivinate the Hollywood musical, and was a smashing success.  It\'s because of this film that some of Gershwin\'s songs have the reputation they have today.

Previously released as a bare-bones DVD with just the theatrical trailer, An American in Paris now gets the full-on Special Edition treatment on both a 2-disc DVD (released in September 2008), and finally in high definition on Blu-ray.  Boasting a gorgeous new "Ultra-Resolution" transfer, the film - shot in three-strip Technicolor - pops.  Deep saturation is prevalent, and while it\'s a bit grainy at times, it\'s never distracting, and the bit-rate on the DVD is high enough to maintain the details.  On Blu-ray, the image is crisper and while there is a bit of grain, it feels very film-like, and the increased resolution allows all of the details in the sets and costumes to come to life.  On both the DVD and Blu-ray, audio is presented as a Dolby Digital 1.0 mono track, and sounds just fine and well balanced between the dialogue and music.  The Blu-ray includes foreign language tracks in French, German, Italian, Spanish and Castilian.

The Blu-ray and second DVD disc also contain a new documentary, "S\' Wonderful: Creating An American in Paris" (HD, 42.5-minutes).  Featuring new and archival interview, the feature is rather extensive and does a great job supplementing the information gleaned from the commentary track, without too much repetition.  It\'s great to see all the behind-the-scenes photos and footage - all in HD if you\'ve got the Blu-ray edition.  A musical outtake, "Love Walked In Outtake" (SD, 3-minutes) is a short bit that was cut from the final film, but is enjoyable to watch.  The 2002 PBS documentary "Gene Kelly: Anatomy of a Dancer" (SD, 85-minutes), is an excellent and insightful feature-length piece that chronicles the talented showman\'s life, and is well worth the cost of the disc.

Finally, we have two audio galleries.  The first one is a collection of "Audio Outtakes", featuring a few musical tidbits, and "Radio Interviews" which are a bit disconcerting since they\'re "one-sided" - so we never hear the questions. (It was done so that local hosts could recreate their own interview - pretty nifty!)

Overall, An American in Paris has greatly benefited from the new transfer, and while the audio hasn\'t been as fortunate, it still sounds great in the original mono.  The extras are solid and informative, and this - like Gigi, which is also now finally available in Blu-ray - is definitely worth picking up.  If you already have the DVD and were wondering about upgrading to Blu-ray, absolutely make the switch.  The extras are all identical, but the improvement in image quality is reason enough!