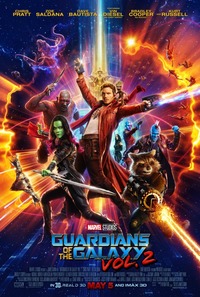 Guardians of the Galaxy Vol. 2

In 2014, Marvel released Guardians of the Galaxy, a delightfully entertaining sci-fi romp that ultimately ties into the larger "Avengers Cinematic Universe" they've been building since 2008's Iron Man. In that first Guardians film, we were introduced to Peter Quill, aka "Star-Lord" (Chris Pratt), a human who was abducted as a kid by Yondu (Michael Rooker) and grew up with his gang of Ravagers become a scavenger mercenary. By the end of that film, Quill's team had grown to include Gamora (Zoe Saldana), Drax (Dave Bautista), Rocket (voiced by Bradley Cooper) and Groot (voiced by Vin Diesel), and after saving the universe from the evil Ronan (Lee Pace), they became known as the Guardians of the Galaxy.

Now taking place a few months later, in Guardians of the Galaxy Vol. 2 we find the Guardians protecting batteries for the Sovereigns (led by Ayesha, played by Elizabeth Debicki) from an inter-dimensional being. In exchange for their service, Ayesha gives them custody of Gamora's estranged sister Nebula (Karen Gillian), who was caught trying to steal the batteries. Unfortunately, Rocket can't keep his paws to himself and after stealing some batteries, are chased after by a Sovereign drone fleet. They end up being saved from the fleet when it is destroyed by Ego (Kurt Russell), but subsequently crash on a planet. Ego reveals himself to be Quill's long-lost father, and brings Quill (along with Gamora and Drax) back to his home planet while the others stay behind to repair the ship. The film then splits into two threads that ultimately converge, as we learn the truth behind Quill's parentage and Ego's grand plans for his son, and Yondu's plans to re-ingratiate himself with the Ravager community he was exiled from by tracking down the Guardians for Ayesha.

Beyond the rather straightforward plotline, the movie is surprisingly emotional. Written and directed by James Gunn, the film has a wonderful balance between humor, drama, action, and some touchingly emotional moments (which unfortunately more often than not tend to be undermined by the humor). At its core, the film is a story about family. The relationships between father (Ego) and son (Quill), and surrogate father (Yondu) are complex, as well as the relationship between Gamora and Nebula. There's a playful relationship between Drax and Ego's servant Mantis (Pom Klementieff), and even Rocket and Groot get some touching and humorous moments. (For the record, Baby Groot steals the show, as expected). Providing a backbone to the film's structure, like the first film, is the music. A collection high energy 70s and 80s rock songs drive the film, complemented by Tyler Bates's fun, heroic orchestral score.

Guardians of the Galaxy Vol. 2 comes to home video in a few different formats, but most notably is Disney's inaugural 4K UHD Blu-ray release. Visually this film is a stunner. Gunn's film is full of color and this release – sourced from a 2K digital intermediate upscaled to 4K with HDR10 – delivers the goods. This is one of the most vibrant releases I've yet to see in UHD, in no small part to Henry Braham's cinematography. The visual effects practically fly off the screen (which they would certainly do in the 3D Blu-ray release) and this is truly a treat for the eyes. I'll point out here that the digital copy that came with the film seems to only be HD, even though a 4K UHD digital release is available – apparently in Dolby Vision, which is likely even better looking.

On the audio side, a Dolby Atmos audio track is provided, with a core Dolby TrueHD 7.1 track. This is a loud and raucous track, and quite demo-worthy. You're placed firmly in the middle of the action during the fight sequences; dialogue is clean and easy to hear, and the music is very present and punchy.

For the bonus features, Marvel has pulled together a small but satisfying collection of extras. None of them are on the UHD disc, but are instead relegated to the Blu-ray included in the package. First up is a feature-length commentary track by director/writer James Gunn. Informative and lively, Gunn describes his vision for the Guardians films, as well as discussing his influences, easter eggs, working process, the actors, the story, visual effects and more. It's a very good commentary but he starts to trail off a little towards the last third. "Visionary Intro" (1.5-min) by James Gunn where he introduces the concept of the film. The main bulk of the behind-the-scenes are presented in a 4-part featurette "Bonus Round: The Making of Guardians of the Galaxy Vol. 2", which runs about 35-minutes long. "In the Director's Chair with James Gunn" (8.5-min) looks at Gunn's process on-set; "Reunion Tour: The Music of Guardians of the Galaxy Vol. 2" (7.5-min) explores the songs in the film and how they are interwoven in the story. Sadly nothing about Tyler Bates in this one; "Living Planets and Talking Trees: The Visual Effects of Vol. 2" (11-min) showcases the VFX in the film without going too in-depth; and "Showtime: The Cast of Vol. 2" (10.5-min) takes a look at the main cast and how chummy everyone is behind the scenes.

Four "Deleted Scenes" are included (running about 5-min) which don't add much to the story but include a few nice moments between characters, a silly "Gag Reel" (3.5-min) is included, and finally one of the most random and hysterical extras on the disc, a music video of "Guardians Inferno" (the end credits song), performed by The Sneepers ft. David Hassellhoff. This feels like a late 1970s video, complete with interlacing, 4x3 presentation, and absolutely amazing costumes. It has to be seen to be believed. So watch it here.

Guardians of the Galaxy Vol. 2 is a sequel that builds nicely on the foundation set by the original, allows our characters to grow and evolve, and provides two hours of high quality entertainment. The visual presentation on UHD is top-notch, the audio thunderous and demo-worthy, and the supplements scratch the surface but provide a good look at the making of the film. This is easily a highly recommended release, and worthy of inclusion in everyone's home video library.