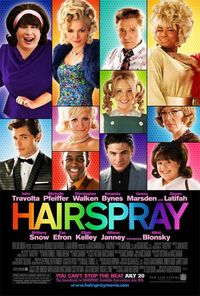 John Waters\' 1988 Hairspray took place in 1962\'s Baltimore, and starred Ricki Lake as Tracy Turnblad, an overweight hyperactive teenager who just wants to dance, and has a progressive view on integration. Her mother Edna was played by the cross-dressing Waters regular Divine, and the story focused on Tracy\'s dream of dancing on The Corny Collins Show, a locally-broadcast dance show. But soon she\'s caught up in the civil rights movement, and tries to get the show integrated. The film was adapted into a Tony-winning Broadway musical smash by Marc Shaiman and Scott Wittman, and now the musical has been reconverted into a film directed by Adam Shankman. But will Hairspray suffer the same fate as the last film-to-broadway-to-film adaptation, The Producers? The answer is a resounding \"no\"!

On Broadway, the role of Edna was played by Harvey Fierstein, but in the film, it\'s John Travolta donning a fat-suit and enduring hours of make-up to play the portly matron. Newcomer Nikki Blonsky plays Tracy, and the rest of the all-star cast includes Zac Efron as Tracy\'s dreamguy Link, Amanda Bynes as the lollipop-sucking best-friend Penny, Christopher Walken as Tracy\'s dad Wilbur, James Marsden as Corny Collins, Michelle Pfeiffer as the scheming Velma Von Tussle, and Queen Latifah as Motormouth Maybelle. The story is pretty straightforward and fun, and the characters aren\'t exactly deep - but there is a strong message about integration, accepting yourself, and going for your dreams that shines through.

Travolta is highly entertaining as Edna, looking like a very heavy Sofia Loren, and his duet with Christopher Walken (in which both dance and sing) is certainly a highlight of the film. Elijah Kelly does a great job as Seeweed, and Amanda Bynes kept making me laugh with her goofy wide-eyed look. There\'s also a funny pseudo-seduction scene between Pfieffer and Walken, but I spent the whole time thinking about Batman Returns. Go figure.

Driving the story is the music, and Shaiman not only adapted his Tony-winning music for the big-screen, but he also wrote (along with Wittman) a few new songs for the film - including the powerfully upbeat (and Oscar-worthy) \"Come So Far\". Director Shankman is a choreographer as well, and the result is a knee-slapping, toe-tapping film that also looks great, with vibrant colors and an aggressive music mix. There are a few cameos in the film, including John Waters as \"the flasher who lives next door\", Jerry Stiller (who played Wilbur in the original film) as Mr. Pinky, and Ricki Lake as a William Morris Agent.

Hairspray opens on July 20th, and is sure to provide plenty of entertainment value. The musical works as a film, something that The Producers didn\'t quite pull off. I don\'t think there will be a rush on Tracy Wigs, but you might just seem more people using hairspray this summer.