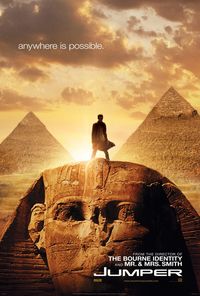 Jumper a movie made of two parts scifi, one part love story, and one part action film. But don\'t let the whole premise of the movie persuade you to pass it by. It may not have been the summer blockbuster that 20th Century Fox thought it could be, but it did marginally well for what they got. The idea of the movie is a young man, David Rice, portrayed by a more mature and less whiney, Hayden Christensen, learns at a young age that he can teleport, or jump from one location to another, and thus the story begins of him accidently learning to control his gift through trial and error.

Over all the movie is a good, don\'t think too much, ride around the world with some wonderful special effects. From London to Cairo, to Ann Arbor and New York and Tokyo the films glossy shine hides its more gritty underlying theme. Discrimination. Sure it might not seem like the movie is a thinking movie and for the most part its not, but that theme is there, as is parental abuse. The book that the movie was based on also addresses these themes but in a wholly separate manner. And if you are a fan of the book, don\'t even think its going to be scene for scene with the book, there are a few similarities but after that, the two take different paths. The book goes with terrorist, the movie however goes with religious zealots with geneocide on the mind, which turns into what Griffin, portrayed by Jamie Bell calls, \"the war\".

The movie starts off rather slow, you get some background information and cover the basics of the idea. Once David Rice meets Roland things get interesting and the pace is sped up. It hits warp speed after Rice encounters Griffin and the war ensues. After all is said and done, with Jumpers/Paladin mix-ups occurring at quicker and more break-neck speeds the finale of the film is rather quiet, subdued, drooling for a sequel. And having watch Jumper numerous times, I too am ready for a sequel.

The special edition DVD comes with a digital copy of the movie for various media players, now I\'m not one to judge but who would want to watch a movie with large vistas on a 2 inch screen? Anyone? No one? Though the digital copy does allow you to transfer the copy to your PC/MAC the only pitfall is, what if the purchaser doesn\'t have an Internet connection? It\'s all in the fine print with digital copy, \"Internet connection and DVD-ROM drive required\", so aside from the possibility of you being one of the few people in the world without an Internet connection yet some how able to read this, the digital copy is just superfluous. Every thing you need is included on disc one of the SE version of Jumper.

Included in the bonus materials are a audio commentary by the director, writer and producer, as well as a documentary on the making of Jumper. Three featurettes are included, exploring the locations, the actor that becomes David Rice and finally the differences between the novel and the movie with interviews from the writers. Also included is an animated graphic novel, that while I was watching it, it just frustrated me, I\'m not sure why, I guess maybe that style of animation just isn\'t for me. And the two final bonuses included on disc one are deleted scenes/extended scenes and the pre-viz for Jumper.

And while the movie is entertaining for what it is, the bonus features, including the copy on disc two, do not make this version of Jumper worth the extra money thrown down to get it. If you want to see Jumper just purchase or rent the normal copy.