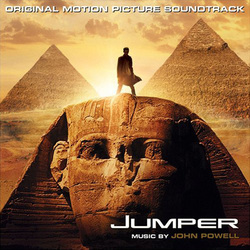 Performed by
The Sydney Scoring Orchestra

The soundtrack for Jumper was written by John Powell, the composer who brought us the scores for Shrek, The Bourne trilogy, Hancock and Kung Fu Panda along with a string of other well known and well loved movies. So this critic has to wonder, why is the score for Jumper so... bland? Of all the tracks on the disc, only two come to mind that are worth a listen a second time, "My Day So Far" and "Coliseum Fight."

With "My Day So Far" we are introduced to the main theme of the film, and will hear it through out the score far too many times. The theme is almost excessively played to the point of ruining the score, but its first cue is a solid, catchy cue that works, that's not to say it doesn't work else where, just not as effective.

The track, "Coliseum Fight" is enjoyable, if not too short. I feel that Powell had a large chunk of potential with this score but either failed to use it, or was denied using it by the studio. The score feels chopped and butchered, things that need exploration are cut short, and those that are excessive in use, are given more time than they need. I feel that Powell just didn't have his heart and soul into the writing of the score, or the studio butchered it after he handed it over.

I've had a pretty solid run with composer's abilities to produce and their abilities to fail with scores, namely Marianelli's scores for The Brave One and Atonement, that netted him an Oscar for the latter, so do I think Powell's score for Jumper is worth the buy, absolutely not. It works with the film, but not on its own. But that's not to say Powell doesn't have more tricks up his sleeves with forthcoming scores. We all have bad days and produce work that isn't always top-notch, in this case, this is Powell's feel.

Jumper on DVD is worth a rent and possible purchase, just not the special edition, unless you enjoy watching things on small screens, and the soundtrack would be in all honesty a waste of money.