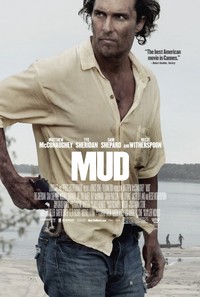 Writer/director Jeff Nichols brings us Mud, about a young teenager, Ellis (Tye Sheridan), who lives on a river in Arkansas with his soon-to-be divorced parents. He is trying to make sense of the world in general—and love in particular.

Ellis has many of the qualities you might expect in a kid his age and in his situation. His parents are trashy and often neglectful, and he occasionally gets into fights and is a rough around the edges. But he is tough and astute. His lack of fear and self-doubt make him a diamond in the rough who we root for to win, even in the face of a universe that seems to have given up on idealistic things like love.

While the movie's pace is slow, it allows us to take in the rich but also dangerous and poisonous world that Ellis lives in. The stage is set when Ellis and his friend (Jacob Lofland) discover a man living on an island up the river from where they live. This mysterious man is only known as "Mud" (Matthew McConaughey) and he is hiding out on the island (for reasons I won't reveal) waiting to meet up with his lifelong love, Juniper (Reese Witherspoone).

Ellis is motivated to help Mud and Juniper because, as Ellis says in one scene, they "love each other." This is the quintessential moment that explains this young boy's admirable character—as well as his Achilles heel.

What is most compelling about the movie is that we see characters motivated by values, and making choices based on those values. Mud's character becomes crystal clear in one brief nail biting moment when he must choose to act—or not. In this sense, the movie illustrates how one's value choices determine one's character, and this aspect of the picture's theme is its greatest asset.

Unfortunately, the universe we must live for two hours and ten minutes is overwhelmingly tragic. Despite Ellis' idealism, you can't help but feel sorry for the kid because, throughout the story, we are so beaten down by failed relationships and failed love that by the time the credits roll this tragic universe is all encompassing and any glimmer of hope is crushed.

(As a side note, the song played over the closing credits, "Help me Rhonda," is wholly inappropriate and jarring to film's tone. However, composer David Wingo provides an excellent score that fits the movie's pace and feel perfectly.)

The performances are universally strong, and Tye Sheridan delivers an excellent portrayal of Ellis. The story is told in a compelling and suspenseful way so, while slow, it is never boring and always intriguing.

Anyone who has struggled to find love will identify with Ellis and root for him to win. At times, such struggles feel like the universe portrayed in this movie—one where love is unattainable or unsustainable. Yes, the romantic idealism Ellis strives for is worth the struggle, but that's not what we take away from this movie. Ultimately, Mud is something you can take solace in, but won't find uplifting or inspiring.