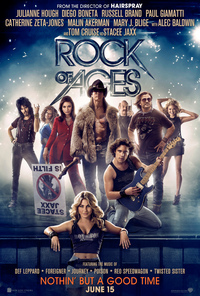 Based on the Broadway hit, Rock of Ages is a "jukebox musical" that takes a look at life on the Sunset Strip in Los Angeles in the late 1980s. It's 1987 and Sherrie Christian (Julianne Hough) comes to LA from Oklahoma seeking to become a famous singer. After her suitcase of records is stolen as soon as she arrives in town, she's taken in by bartender assistant Drew Boley (Diego Boneta), who helps her get a job as a waitress at his workplace, the Bourbon Room.

The Bourbon Room seems to be one of the hottest joints on the Sunset Strip, but it's in serious financial trouble. Owner Dennis Dupree (Alec Baldwin) and his manager Lonny Barnett (Russell Brand) decide that booking the hit band Arsenal for their final performance would help clear their debts just as lead-man Stacee Jaxx (Tom Cruise) has announced he is leaving his band to go solo. But when Patricia Whitmore (Catherine Zeta-Jones), the religious conservative wife of Mayor Mike Whitmore (Bryan Cranston), hears about the concert, she rallies her church to protest the concert and shut down the Bourbn Room because of the negative image LA has gotten due to rock 'n' roll on the Sunset Strip.

After Arsenal's opening act cancels, Drew's band has an opportunity to make it big—but his success might affect the blossoming relationship with Sherrie. As all of this is occurring, Stacee's manager (Paul Giamatti) has set up an interview for Jaxx with Rolling Stone's Constance Sacks (Malin Akerman), but things might happen between them as well.

You can probably figure out where things are going to go—there are no real twists in the film and the plot is fairly predictable. What propels the film are the musical numbers: classic late '80s rock songs whose lyrics drive the story forward. All of the actors are quite capable singers, with Hough and Boneta doing a relatively decent job carrying the lead—but weak—storyline. Probably most surprising is Tom Cruise, who can really belt out some good tunes and was fun to watch as arrogant rocker Stacee Jaxx. In the end though, Rock of Ages is an overly-long love letter to the late 1980s with a shallow plot tying things together. It's fun and entertaining, but ultimately hollow and lacks any real memorable bits.

Directed by Adam Shankman (Hairspray), the film has some fun dance numbers with infectious high-energy choreography, but the weakest part seems to be the acting. When people stop singing things grind to a halt and we're stuck with a superficial storyline that even seasoned and solid actors like Cruise, Baldwin, Zeta-Jones and Giamatti can't save, but that doesn't detract from the spectacle and the film has a good visual look to it, excellent soundtrack, and fun dance numbers. Is it a good film? Not really, but sometimes that's okay—it all depends on what you expect to get out of it.

Rock of Ages comes to Blu-ray sporting a solid image that replicates the digitally-shot film perfectly on your screen. The colors are bold and vibrant. With a majority of the film taking place at night or in dark nightclubs, the shadows have deep blacks, but still retain levels of detail. Visually, it's very nice to look at and Bojan Bazelli's cinematography keeps things interesting.

Audio is presented with a very aggressive DTS-HD Master Audio 5.1 English track that showcases, appropriately enough, the music. The viewer is fully enveloped by the experience with reverberating acoustics and crowd sounds coming from the rear to really put you in the middle of the music. The biggest problem though is that, compared to the songs, the dialogue and remaining audio elements seem to be lacking as much punch and power. If you make the mistake of turning your volume up to hear dialogue louder, you'll find yourself scrambling for the remote to turn it down when the next musical number hits. Otherwise, everything is clear and defined and the sound of Rock of Ages lives up to its name.

The movie comes to Blu-ray in two flavors: the theatrical version (rated PG-13, running 123-minutes) and the extended cut (rated R, running 136-minutes) featuring more music and character bits. For supplements, there are a handful of meaty bits, but it's not quite a full meal. First up is "Rock of Ages: Legends of the Sunset Strip" (HD, 30-min), in which real rockers from the '80s discuss what it was like to perform in that historic time. It's a very informative and interesting glimpse at what life was like for these guys and how some of their songs outshined the bands themselves. Related to this featurette is "The Stories We Sing" (HD, 13-minutes), in which the artists reveal the stories and events about how some of their songs came about.

"Behind the Scenes: Defining a Decade" is a section hosted by stars Diego Boneta and Julianne Hough looking at different aspects of making the film. "The '80s Look" (HD, 4-min) explores how they recreated the late '80s world of rock. "It's All About the Moves" (HD, 7.5-min) looks at the choreography in the film with director Adam Shankman (himself a choreographer) and choreographer Mia Michaels. "Stripping Miami" (HD, 4.5-min) looks at the set design and how they transformed a portion of Miami into the Sunset Strip. "The Tease" (HD, 4-min) looks at the hairstyles of the 1980s. "If You Build It, They Will Rock It" (HD, 3-minutes) looks at more set design, in particular the key set of the "Bourbon Room," and how it references the designs of classic 1980s Sunset Strip clubs. "Connection to the Music" (HD, 4.5-min) shows the actors talking about how they relate to the songs they sing. And, finally, "So It Started in a Bar" (HD, 7-min) looks at the genesis and journey of Rock of Ages from it's LA roots, to a small off-Broadway production, to Broadway, and to the feature film.

A music video of "Any Way You Want It" (HD, 2.5-min) featuring Mary J. Blige, Constantine Maroulis, and Julianne Hough is included, as well as "Music Jukebox," which gives the viewer the ability to watch individual musical numbers from the film. Finally, no trailer is included, but we do get a promotional piece for "Visit Florida" (HD, 30-sec) which implores you to visit the state.

Rock of Ages has a predictable plot, uninspiring leads and some hammy moments—but still manages to entertain with enjoyable songs and choreography. If you are itching to watch a movie musical, you can probably do better with Shankman's Hairspray, but fans of '80s rock will still find something to like in Rock of Ages. A solid visual presentation dominates the Blu-ray release and the extras aren't in-depth, but still satisfying. Ultimately, though, you would be better off renting the film first before deciding if you want to buy it.