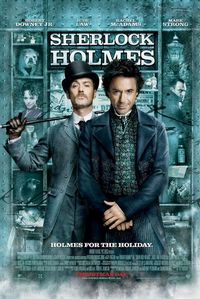 In Guy Ritchie's re-imagining of the classic Arthur Conan Doyle sleuth, Sherlock Holmes, Robert Downey Jr. plays the titular character, and Jude Law plays Dr. Watson. The film starts in 1891's London, where Holmes and Watson manage to stop Lord Blackburn (Mark Strong) from successfully enacting a human sacrifice ritual as part of the dark arts. During the three months between Blackburn's capture and his execution date, Holmes has grown bored, Watson has become engaged, and soon the mysterious Irene Adler (Rachel McAdams) - who is the only woman to have outwitted Holmes twice - comes back into his life to ask him to find a missing person.

Just before the execution, Blackburn asks to meet with Holmes, where he informs him that "death is just the beginning" - and three more murders will occur. Indeed, just a few days after the hanging, Blackburn's tomb is found shattered, and in his grave is the body of the missing person that Irene asked Holmes to find. With rumors of Blackburn's return from the dead floating around London, a climate of fear takes hold, and Holmes and Watson start to investigate how his resurrection came to be. When three murders take place - as Blackburn had predicted - it is now up to Holmes and Watson to solve the case, before Blackburn can enact his evil plan for world domination. (Yes, the film goes there.)

On the whole, Sherlock Holmes is a fun film. It's not a great film, but it does provide just over two hours of entertainment, even if (towards the last third) it devolves into a Jerry Bruckheimer-inspired action film. Robert Downey Jr. shines as Holmes, playing him as a rapscallion and Jude Law gives Watson a little more depth and back-story as well. The energy of the film is solid, with Mark Strong playing a nice antagonist to the piece, and the way Holmes works out his fight moves in advance is a nice touch by Ritchie.

The musical score, by Hans Zimmer, is quirky and affecting, playing off the bohemianism side of Holmes' character. The low-saturated look of the film gives 19th century London a depressed and somewhat gritty look, and it adds nicely to the tension during some of the darker scenes.

The parts of the film that alluded to the dark arts and secret societies reminded me a bit of Young Sherlock Holmes, though Ritchie's apparent dislike of Kabbalah seems to be evident in the negative imagery of Hebrew letters contained within the dark arts books used by the secret society, the Temple of the Four Orders. (Hey Guy, keep your personal issues with your ex-wife out of the film!) While not a perfect film by any means, Sherlock Holmes is a fun but flawed film. Downey Jr. is a delight to watch, and with a playful approach to the classic material, the film is certainly worth seeing as part of a fun night out.