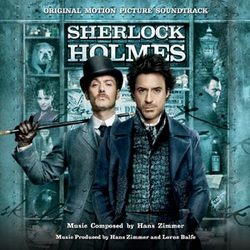 In a recent interview on HeyUGuys.co.uk, Hans Zimmer admitted to intentionally moving as far from the sound of The Dark Knight as he could for Sherlock Holmes, partially on director Guy Ritchie's request. According to Zimmer, this score is experimental and, like the movie, a little out there. The composer also says that it doesn't sound like anything else. This is true, to a certain extent. The score matches the humorous, quirky style of the film and employs Irish and gypsy-influenced instrumentation, including banjos, fiddles, accordions, and North African percussion, all performed by soloists.

However, there is plenty of familiar territory here for Hans Zimmer fans. Granted, it is not at all what one expects when he scores an action film. Rather, we get somewhat of an amalgam of the Jack Sparrow themes from Pirates of the Caribbean and An Everlasting Piece, Zimmer's Irish score from 2000. For example, "I Never Woke Up In Handcuffs Before" features racing strings, both acoustic and electric, over a light percussion rhythm, and backed by tubas. Fans will also note a common use of the trilled acoustic guitar often heard in the North African scenes from Gladiator. Yet while there may be a number of similarities, the score as a whole is a step sideways from many of the projects Zimmer has undertaken in recent years and is a very interesting score to listen to.

The main theme from Sherlock Holmes is quirky and is performed by an odd arrangement of instruments, usually an assortment of plucked and bowed strings, but also including the cimbalom, banjo and accordion, such as in "Discombobulate" and "My Mind Rebels at Stagnation". There is no theme for Watson, just one for Holmes. Zimmer intentionally wanted a lack of melodic presence for scenes when Watson was alone without Holmes. The Holmes theme is a cousin to the style of the Jack Sparrow theme from the Pirates sequels, but has its own identity through the further variation in orchestrations. The versatility of this tune is such that it is able to be utilized as both a main melody and a rhythmic component of other cues.

Some of the slower parts to the score are reminiscent of the Angels & Demons style, yet maintain the Sherlock Holmes feeling. A slower cue at the end of "My Mind Rebels at Stagnation" features this more restrained pace and solo cello. "Psychological Recovery... 6 Months" is an epic 18-minute track featuring a range from solo accordion to pounding bass strings. As the cue progresses, the brass kicks in for some of its limited presence in this score as the main theme takes an underlying, rhythmic role. The final track, "Catatonie" is quieter and slower, but maintains the music-box style of the melody. The end of the cue features a very slow, but heavy statement of the theme, then picks up the pace, racing to the end of the album with whirling strings and the main theme as the rhythmic pulses of the underscore.

Relatively, Sherlock Holmes is a small score. Again like Angels & Demons and An Everlasting Piece, the music is performed by soloists and a very small orchestra, moving away from the well-known large Zimmer orchestra and synth scores. In the interview mentioned above, Hans Zimmer says that he has given up on large orchestras because it puts a blanket over the music. Music can still sound massive without being massive, while bringing out solo performances as individuals make their instruments sing. Zimmer found his favorite soloists and went from there so the score would feature the emotion of the players in ways a large ensemble cannot. The score for Sherlock Holmes is a refreshing sound from Zimmer and there is plenty for traditional Zimmer fans to enjoy as well. And for those of you who like this score, do check out An Everlasting Piece, which is also quite good and may have slipped under the radar for many Hans Zimmer fans.