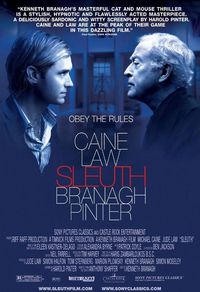 No matter the subject matter, director Kenneth Branagh has always made interesting films. Even if they don\'t turn out as good as you\'d hope (i.e. Mary Shelly\'s Frankenstein), there is still plenty to keep you interested and engaged. Such is the case with his latest film, Sleuth. An adaptation of the Tony Award-winning play by Anthony Shaffer, the film is also a remake of the 1972 adaptation that starred Lawrence Olivier and Michael Caine. Mystery author Andrew Wyke (Olivier) invites the man he knows to be having an affair with his wife, Milo Tindle (Caine), to his country estate to confront him about the situation. Knowing that Tindle is financially insecure, and knowing that his wife demands a great deal to stay content, Wyke proposes that Tindle steal some of Wyke\'s valuable jewels to sell, and Wyke can cash in on the insurance money. Things are not as they seem, however, and a devious game of wits ensues.

This new 2007 version is pretty much the same story - with a few changes - adapted by Nobel Prize-winning author Harold Pinter. Adding to the novelty of the remake as well, Caine is playing the Olivier role, and Jude Law plays the role that Caine originated. The film is very static - lots of locked-off shots, lengthy takes, and even plenty of scenes acted out through the view of a security camera. It adds to the tension effectively, and allows the actors to play the scenes out without editing or sound effects hindering the effect. The dialogue is what truly drives the story, and it was doing a great job, until near the end, where some odd subtext suddenly threw the whole thing out of whack. It was a creative decision that wasn\'t in the original play or film, and I don\'t know what Pinter (or Branaugh) was trying to say with it, but it just made the whole thing ineffective. A shame, since it was doing such a great job until that point.

The set design is simple, cold, modern, and good. We know the layout backwards and forwards by the time the film is done, so there is never any uncertainty as to where we are. The simplistic score by Patrick Doyle features piano and strings, and has a steady rhythm that helps enhance the momentum of certain scenes.

Sleuth played in very limited release, and will likely be on video before year\'s end. It\'s not as good as the original, but it still has some very effective and worthwhile segments. Caine and Law play off each other nicely, but if you really want to watch a game of wits, watch the original.