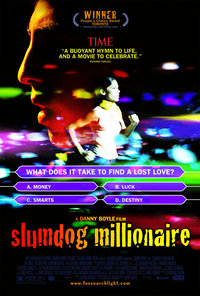 In Slumdog Millionaire, Jamal Malik (Dev Patel) has just gotten the farthest in the Indian version of \"Who Wants to Be a Millionaire\" than anyone ever has.  There\'s just one problem - there\'s no possible way that this kid from the slums of Mumbai could have known the answers, so he must have been cheating, right?  After being beaten up by the police trying to extract a confession, Jamal finally gets a chance to explain how he knows the answers - the fascinating story of his life provided them.  As a young boy living in the slums, he and his brother Salim became orphans when their mother was killed during an anti-Muslim attack.  Taken to an orphanage that exploits children for profit, Jamal befriended Latika, but soon they all escape - and Latika is re-captured.  Over the years, as Jamal tries to find Latika, Salim falls in with the organized crime elements of the area.  Themes of betrayal and redemption are prevalent as Jamal continues his search for Latika.

Based on the 2005 novel Q and A, this new Danny Boyle (Trainspotting) film is one of the best movies of the year, hands down.  It has everything in it: action, drama, romance, tension, excitement, social commentary, and - during the end credits - even a bit of Bollywood.  The characters are fully three-dimensional, with Jamal being a completely sympathetic figure, and through Boyle\'s direction, the poverty-stricken sub-culture of Mumbai comes to vibrant life.

Dev Patel has been gaining some well deserved attention for his performance.  The music by A.R. Rahman brings a mixture of old India and modern beats to engage the viewer, and provides plenty of driving energy and emotion to the film.  If there is one movie you see this winter, be sure to check out Slumdog Millionaire.  It\'s not a conventional film by any means, and it\'s a great story told exceptionally well.