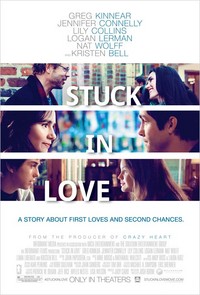 First time writer/director Josh Boone brings us a charming, not-so-rosy but emotionally rewarding drama, Stuck in Love, about a family of writers. Thematically, the movie manages to cover the gamut of love in its various states and stages—and with a refreshing dose of authenticity.

Greg Kinnear and Jennifer Connelly play a divorced couple, and Kinnear's character is vying to win back his ex-wife's affection while also having an affair with a married woman (Kristen Bell). This is accomplished, not with cynicism, but grace and understanding. This situation is crazy enough that it is funny but believable, thanks in part to Kinnear's strong and subtle performance.

The two kids, played by Lilly Collins and Nat Wolff, have their own struggles in love. The daughter, a college student who is having her first novel published, has a cynical view of love and uses sex to keep a safe distance from men. Her brother, a virgin high school student, pines after the girl of his dreams but does not have the guts to talk to her.

Everyone in this family is challenged, love-wise: The father to let go, the mother to hold on, the son to be bold and make his move, and the daughter to open up an be vulnerable. Often they challenge each other, sometimes with love and encouragement and sometimes with anger and rage. The net result is that this feels like a real family.

This is an enjoyable picture to watch because it rewards its audience for paying close attention to detail, especially about the characters and the performances themselves. Sometimes a character will act stupid, or naive, or is too forgiving—or not forgiving enough—but then something is revealed in an "ah ha" moment that, upon reflection, results in a quiet "ah, yes" nod understanding. Further, every character has something unique to identify with, and it is easy to root for all them to succeed in their endeavors.

However, one minor quibble but worth mentioning is that a final scene on the beach between Kinnear and Collins (the daughter) feels rushed and unnatural. It's clear what the director is trying to accomplish, so we get the idea, but it is not convincing.

Songs are well placed throughout and the soundtrack re-creates the movie's feel and is worth a buy, especially for the acoustic "You Are Your Mother's Child" song by Conor Oberst. The original score by Mike Mogis and Nate Walcott is serviceable but at times cliche and with its mostly slow and contemplative style. It works in context but does not make a strong stand-alone album. The composers also penned two of the songs in the film "At Your Door" and "Somersault In Spring", enjoyable and available on the Stuck in Love: The Writers Playlist album.

Stuck in Love is a good warm-up-for-the-holidays kind of movie. Bookended by scenes of Thanksgiving dinners, we are taken on a journey that reminds us that when it comes to love, we indeed are often stuck—sometimes for the worse and, sometimes, for the better.

This movie was screened at the reviewer's home via an HD stream from Amazon Instant Video (full price paid).