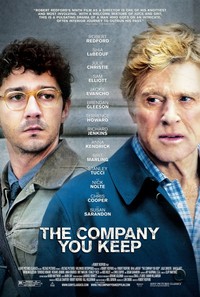 The Company You Keep

Review: Company You Keep, The

Robert Redford's The Company You Keep is one of those quiet mystery / thriller types of movies Hollywood should be making more of. What makes it so compelling is the structure of the script and how it untangles the mystery at hand.

The big secret to its formula is this: there is always another, bigger mystery.

When questions are raised in the beginning about the character played by Redford, you think you're being set up for an entire feature length adventure to find the answer. But when the answer comes twenty minutes or so later, it is not only satisfying to get the answer, but in doing so it raises a slew of other questions that in themselves seem like enough to sustain the remainder of the film. But they, too, are answered in time, and the process continues and repeats.

The ending may leave with you with some questions, too. Not about what happened, but more about the morality of what happened. The idea that journalism shouldn't be about destroying people's reputations without evidence is a player here, and there is an interesting question of journalistic ethics at play. There is a fine line on which Shia LaBeouf's character walks, bordering on libel at times. But when LaBeouf pushes on envelope, feathers are ruffled and characters who are presumably innocent now clearly have some questions to answer, and the plot moves forward.

At the heart of the mystery is a 1970s unsolved murder of a security guard during a bank robbery. And, even though some of the accused here may be innocent of committing the crime in question, that the suspects all have chosen a vow of silence in order to protect the guilty is something that the movie evades entirely.

Sure, some people's lives would be hurt if the truth were exposed—which speaks to picture's the theme—but that is no excuse to evade justice. Living a lie for e sake of protecting another's innocence is never right, and this is one point that the movie gets wrong.

The supporting cast includes several highly recognizable actors including Sam Elliott, Susan Sarandon, Nick Nolte, Chris Cooper, Stanley Tucci, Anna Kendrick and many more. Redford as director is impressive, as he manages to pull this off without taking us out of the story. That he was able to attract such talent is just as impressive, and we can see why these actors gladly took these roles. This is a well cast movie.

The score by Cliff Martinez is mysterious, pondering, and suspenseful—the perfect fit for this project.

There are many elements of typical liberal bias one might expect in a story about investigative journalism that is produced by Hollywood. If you can stomach these and ignore them—and appreciate the construction of the plot and enjoy figuring out the many mysterious layered throughout the film—you will find that The Company You Keep is an intellectually engaging and thought provoking movie that rewards an audience who likes to pay attention and actually thinks about the movie they are watching.

This movie was screened at the reviewer's home on a Blu-ray rental disc from Netflix.