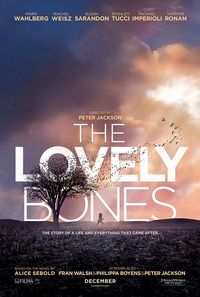 As his follow-up to King Kong, Oscar-winning director Peter Jackson, along with co-writers Fran Walsh and Philippa Boyens, adapted the 2002 award-winning novel, The Lovely Bones, by Alice Sebold. The story, which takes place in December 1973, focuses on 14-year old Susie Salmon (Saoirse Ronan), and her rape and murder by secluded neighbor George Harvey (Stanley Tucci). Now in a Heaven-like limbo, Susie watches as her family deals with their loss, and her father (Mark Wahlberg) tries to solve her murder. George has managed to get away with the crime, and is slowly starting to prepare to murder again, as Susie struggles to balance her desire for vengeance, and her need to have her family recover from their loss and move on with their lives.

The Lovely Bones is basically a lengthy tone-poem, primarily comprised of voice-overs and montage. The afterlife sequences attempt to be visually creative, but don't look as top-quality as one would hope from Jackson. It's almost like What Dreams May Come 2. The tone of the film is frustrated; it's hard to tell what, exactly, Jackson is trying to tell us with the film - since much of the movie is spent with the audience wanting to see Susie's murder avenged (or at least solved). Instead we end up with a lot of slow-motion montages with monologues about life, mixed in with a few excellent sequences that range from the absurdly comic (anything involving Susan Sarandon's portrayal as the chain-smoking, alcoholic grandmother), to the unnervingly tense (Susie's sister sneaking into George's house). The problem is that while these sequences are great, they don't feel like they belong in this film. We also have a sub-plot involving Susie's crush on the high-school heartthrob, which doesn't seem emotionally fulfilling even when she finally gets her kiss.

While Stanley Tucci is amazing (and disturbing) as the serial killing neighbor, and Saoirse Ronan does a good job holding much of the film together, the big problem with the film is casting Mark Wahlberg as the father. I'm not against Wahlberg - he's certainly a competent actor, and his performance in The Departed was truly great. It's just that his performance in this role seems to be just as bad as it was in The Happening, and feels like he's living up to the Andy Samberg SNL parody. Jackson is certainly a good filmmaker, but Wahlberg's scenes were just tough to get through. The music, by Brian Eno, is moody and dour, keeping the tone of the film down, and the art direction of the film is spot-on, recreating suburban Pennsylvania in the 1970s perfectly.

The problem I had with The Lovely Bones is that for a film about how death affects those we love, it didn't have much soul. The three writers who adapted The Lord of the Rings so effectively clearly aren't able to adapt just any literary work. The best thing to come out of the film is Stanley Tucci and his truly frightening performance, but it's best to wait for home video before checking out the movie.