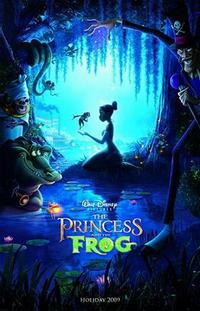 The Princess and the Frog

Review: Princess and the Frog (Blu-ray), The

While the last few years have focused on exclusively computer-animated projects, like Meet the Robinsons and Bolt, Walt Disney Feature Animation finally returned to the classic art of 2D hand-drawn animation this past year, with The Princess and the Frog.  Directed and written by The Little Mermaid’s John Musker and Ron Clement, the film is loosely based on the classic fairytale of "The Frog Prince", but with a few twists.  First, the story and action is set in early 20th century New Orleans, giving the film a uniquely American angle.  For her whole life, Tiana (Anika Noni Rose) dreamed of opening a restaurant, but she's struggling, working two jobs, while trying to save up money to buy a place where she can bring her dream to life.  Her childhood friend Charlotte (Jennifer Cody) comes to the rescue when she hires Tiana to cater a Mardi Gras party with her scrumptious beignets, giving her the right amount of money to buy the place.

Meanwhile, the Maldovian Prince Naveen (Bruno Campos) arrives in New Orleans, hoping to marry a rich southern belle, having been cut-off financially from his parents.  Sensing opportunity, the malicious voodoo doctor Dr. Facilier (Keith Richards) cons Naveen, turning him into a frog.  At the Mardi Gras party, Naveen mistakes Tiana for a princess, and believing what he knows of "The Frog Prince", convinces her to kiss him.  But this is where the story takes a twist.  Tiana - not being a real princess - is turned into a frog as well.  Now the two must navigate through the challenges of the Louisiana bayou to find out how to reverse the spell.  In the process, they meet a trumpet-playing alligator named Louis (Michael-Leon Wooley), and a Cajun firefly named Ray (Jim Cummings) who is in love with Evangeline - actually a star in the sky.  With their help, the mismatched pair seek out Mama Odie (Jenifer Lewis), a voodoo queen who lives deep in the bayou.  She explains how they can reverse the curse, and soon the race is on to return to New Orleans, culminating in a showdown with Dr. Facilier.

The Princess and the Frog is structured like most Disney animated musicals - songs drive the storyline, provided by Pixar favorite Randy Newman.  He lends his uniquely American songwriting skills to the film, digging deep into the rich musical history of New Orleans.  The result is a wide variety of songs that range in style from jazz to bluegrass to Cajun ballad, all while moving the story forward.  There are a few intense moments, so it's not quite for little kids, and there are a few plot issues and story cheats, for the most part The Princess and the Frog is a well-crafted story that re-introduces the nearly lost art of traditional hand-drawn animation to a new generation of kids, while keeping adults entertained.

Released as a combo pack Blu-Ray / DVD / Digital Copy three-disc set, The Princess and the Frog looks best on Blu-ray.  The 1080p HD image is perfect - the colors are solid, the ink lines natural and organic, and there were no video artifacts noticeable at all.  Even colors that had gradations didn't exhibit banding or any other digital issues that would normally have stood out.  In all, this is an excellent transfer for a 2D animated feature.  Similarly, the audio is spot-on.  The primary track is an English DTS-HD Master Audio 5.1 track, which showcases Randy Newman's music first and foremost.  The sound design is spectacular, with full use of all six speakers, and extensive use of the surrounds places the viewer right in the heart of Louisiana.  From the bustling streets of New Orleans to the buzzing sounds of the bayou, it's fully immersive, without comprising the dialogue, which is clear and front-and-center.

Considering that this is essentially a single-disc release of the film (just provided on three different media types), the supplements are solid but not as extensive as some of the other 2-disc releases for other Disney animated films.  First up is a feature-length audio commentary with writer/directors John Musker and Ron Clement, with producer Peter Del Vecho. These guys know their stuff, having worked in feature animation for decades.  They talk about everything from story changes and development, casting, art direction, music, and more.  It's an engaging and never dull track that is a must-listen for any animation fan.  Also included is a "Work in Progress" picture-in-picture version of the film, which shows the rough pencil sketches and storyboards as the film plays.  Unfortunately you can't listen to the commentary with this option enabled, which is a bummer.

In the "Music and More" section, we only have one piece - a video for Ne-Yo's end title track "Never Knew I Needed" (HD, 4-minutes).   Surprisingly, there's nothing here about Randy Newman, and his songs and score, but that comes later in another section.  Four "Deleted Scenes" (HD, 12-minutes) are presented, with introductions by Musker and Clements.

Next up we have a collection of featurettes about the film.  "Magic in the Bayou" (HD, 22-minutes) is hosted by executive producer John Lasseter, and is a nice overview look at the making of The Princess and the Frog, with a particular emphasis on the return to hand-drawn animation, and the challenges the filmmakers and artists faced.  "Bringing Life to Animation" (HD, 8-minutes) is an interesting look at the live-action reference footage that was shot for the animators to use while working on the film.

The remaining pieces are all short EPK-styled nuggets that provide only a tease of what could have been longer featurettes.  "A Return to Hand Drawn Animation" (HD, 3-minutes) is a quick look at the decisions made to go back to hand-drawn animation, covering some of the same ground as the "Magic in the Bayou" track.  "The Disney Legacy" (HD, 3-minutes) is a quick look at Disney's long tradition of feature length animated films, and their devotion to telling good stories over everything else.  "A Return to the Animated Musical" (HD, 3-minutes) is a short but interesting look at the work that Randy Newman did on the film, working with the various actors and creating the different types of musical styles for the songs that feature in the film.  Not much on his underscore here, though.  "Disney's Newest Princess" (HD, 3-minutes) looks at the character of Tiana, from voice actress Anika Noni Rose to the animators that brought her to life.  This is continued in "The Princess and the Animator" (HD, 2-minutes) which looks more at how the animators modified Tiana's behavior to give her some unique traits, including being left-handed (because Anika Noni Rose is, and requested it)!  "Conjuring the Villain" (HD, 2-minutes) is an all-too-brief look at voodoo master Dr. Facilier, and Keith David's excellent portrayal of him.  There's nothing on the other characters, which is too bad.

A rather extensive selection of "Art Galleries" is provided, showing off the various character designs, reference photos, background art, and more.  And finally, for the kids, an interactive game "What Do You See: Princess Portraits" is included.  In all, The Princess and the Frog is a welcome return to the traditional hand-drawn animated musical, with a fun story and great songs, and with an excellent video and audio presentation - as well as solid but slightly limited extras - is a welcome addition to your growing Blu-ray collection.