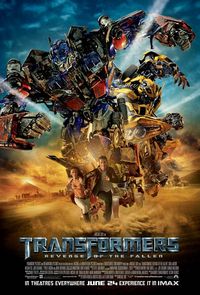 Transformers: Revenge of the Fallen

Review: Transformers: Revenge of the Fallen

I honestly don’t even know where to begin with this one.  When I saw Transformers back in 2007, I felt that it was one of the most kick-ass fun stupid movies of the summer.  The visual effects were awesome, the sound design was loud and punchy, and the story and acting were “whatever”.  So now comes the inevitable sequel, Transformers: Revenge of the Fallen.  Everyone who worked on the first one is back for the sequel, and this time everything is amped up.

The visual effects are better.  The sound is louder.  And yes, the bad story is even worse, and the acting is terrible.  So let’s see how to even tackle this one.  (Warning, I will include spoilers here – everyone who wanted to see it has already seen the film anyways!) After the event of Transformers, the military and the Autobots (led by Optimus Prime) are in cahoots to secretly hunt down rogue Decepticons even though they royally messed up downtown Los Angeles in the first film, and just destroyed half of Shanghai in the beginning of this film.  Known as NEST, this co-op team is also protecting a shard of the All Spark from the first film, which the Decepticons want.  Meanwhile, Sam (Shia LaBeouf) and his hot girlfriend Mikaela (Megan Fox) are going through the usual relationship uncertainties since he’s off to college, and she isn’t.  When Sam discovers another shard of the All Spark, it imprints information in his brain, and – after his bodyguard Autobot Camaro known as Bubblebee saves him from the various appliances that activate when he drops the shard into the kitchen – he heads off to school hoping to keep his long-distance relations active through…. web chat.

In school, Sam’s roommate is a conspiracy freak convinced that there are alien robots out there (and there are), and after a meltdown in Astronomy class where Sam writes all these symbols he sees, a hot girl – who actually is a Decepticon – tries to seduce and then kill Sam, but Mikaela shows up and thankfully they’re off to try to see what’s going on.  Apparently (and bear with me here), the Decepticons stole the shard that NEST was protecting so that they could bring Megatron back to life.  It also then turns out that Megatron has a boss, a former Prime known as “The Fallen” – who is in exile on some meteor somewhere in space.  He wants to turn on a machine that has been on Earth for hundreds of thousands of years so that he can harvest the Energon from our sun – but in the process it would destroy Earth.

The truth of the matter is, my head hurts after writing all of this, and I haven’t even gotten to the point of the story – but that’s because I still can’t figure it out, even after all this time.  At one point during the film, the gang goes to the Air and Space Museum to re-activate an older Prime who might have knowledge to help them – and he teleports them to Egypt.  Teleportation is never explained at all in the film, and yet they use it as though it were as common as hailing a taxi.  Then there’s the whole bit about the ancient symbols indicating where the machine is, and they bounce between the pyramids in Egypt and Petra in Jordan as though they are mere blocks away from each other. (Fellas, there’s a small country called Israel in between them – might wanna look into that.)

Yes, we get lots of cool robot fighting action. Yes, we get loud explosions and Steve Jablonsky’s music is fun and big, much like the first score.  Yes, we get less shaky camera work.  But the story is so convoluted as to make your brain hemorrhage.  And don’t even get me started on John Tuturro, or the “racist robots”.  But you know all this, since you (like most of America) has already seen the film.  So why am I writing this anyways?