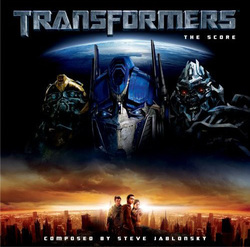 Steve Jablonsky\'s Transformers score may sound deceptively like it was written on autopilot to fit the Bruckheimer model of action scoring made famous in Bad Boys, The Rock and Pearl Harbor, then parodied in Team America: World Police. And in some ways, it does follow this newly clichéd sound. However, this sound is perfectly appropriate for Bay\'s Transformers and yet Jablonsky\'s score has an impressive depth to it. To start, he wrote a half dozen themes for the film. String solos over electronic percussion and an impressive choral presence make this score a bit more than meets the ear on the first impression.

Reviews of this score have been mixed, often criticizing the traditional Bruckheimer/Zimmer sound for a summer blockbuster and lamenting the lack of any musical ideas from the 1980\'s cartoons. On the first point, Jablonsky was hired to compose a score for a Bay science fiction action picture; Bay clearly has certain sounds in mind when hiring someone for this task. What Jablonsky did was take a more organic approach than necessary, using a choir and live orchestra when a synthesized score would have worked fine for the production. On the second point, there is no reason to expect any use of the themes from the original cartoons in the 2007 film. Both films varied on many levels - characters, plot, location, etc - and Jablonsky\'s score focuses on the new film, as it should. The 1986 Transformers featured a very electronic synthesizer score which would not have worked in the new film or in Jablonsky\'s soundscape for the film.

I commented in my review of Jablonsky\'s The Island that Remote Control Productions was beginning to introduce a common element into their scores, which is a moving eighth note line, prominent in King Arthur, Batman Begins, The Da Vinci Code, and most recently Pirates of the Caribbean. Jablonsky also utilizes this motif in Transformers, but it is not a rip-off of these other scores\' themes. This is a new technique for scoring action/adventure films that is effective in adding motion to the score under drawn out thematic statements. The use of this technique in Transformers is appropriate to the film and the score\'s needs. A composer cannot reinvent every spoke of the wheel with every score, nor should one be expected to. Does Jablonsky\'s score work well in the film? Very.

Jablonsky composed a half dozen themes for this score and a number of motifs as well. Major themes are, of course, for the Autobots and Decepticons, which are laid out in the first two tracks. Other themes include Sam\'s Theme, the Heroic Theme, and one for Optimus Prime and the All Spark. Fortunately these themes are recognizable both by their melodies as well as their instrumentation. The Autobot\'s Theme is almost always performed by the brass and underlain by the moving eighth note line. It is an uplifting, rising melody that is often joined by the choir. The Decepticons theme is a staccato rhythm of two descending notes as the offbeats in a 3/4 rhythm. The theme is sometimes whispered/chanted by a low chorus, as in "Decepticons" and underscored with harsh electronic bass. This theme is used in other ways as a motif, such as in the beginning of "All Spark", as an acoustic guitar line underscore, recognizable mainly by the emphasis on the second beat.

The Optimus Prime and All Spark themes are similar, differing also in orchestration. For example, the Optimus Theme is played on a woodwind for the Autobot leader in "Optimus". String solos are characteristic of the All Spark Theme. Sam\'s Theme is recognizable by its acoustic nature, as in "Witwicky" and "Sam at the Lake". The Autobots Theme is used for the character of Bumblebee, especially in the first half of the film, as in "Bumblebee", which is again underscored by the eighth note pattern. Bumblebee is also scored with the Optimus Theme in "Bumblebee Captured" with a solo cello. Other minor motifs include a heroic brass statement for the military base in "Soccent Attack".

The Heroic, All Spark, and Optimus themes are very similar and easy to confuse. Fortunately, Jablonsky arranged the album with clear titles to be able to pinpoint most of the themes pretty easily. The Heroic Theme is actually the most used theme and highly varied. However, it is the most orchestrated one too, usually featuring both the orchestra and choir. The best example of it is in one of the highlights of the album, "Arrival to Earth". This cue is reminiscent of the finale cue from The Island. The last track, "No Sacrifice, No Victory", features a brief Autobot statement, then the final statements of the Heroic Theme. This theme could also be considered the film\'s main theme with the other Autobot character themes played off it.

One of the most interesting themes is not one of the anthemic, hero themes, but the Decepticons theme. It is more a rhythm than a melody, distinguished both by the note emphasis and the descending 2-note pattern. It is also the most highly varied in the score, used both as a major theme when chanted by the choir and also as an element of the underscore in contrast to the eighth note motif that is more used for the Autobot themes. It is heard as short trumpet blasts in "Deciphering the Signal" as well as hinted at by the beat emphasis in "Soccent Attack". The chanting version takes over and is also prominent in "You\'re a Soldier Now". This statement is followed by the Autobot Theme as the Decepticon Theme turns into a motif and continues to play beneath it. It is a rare theme that can be manipulated in a such a way to be played under or over other thematic elements of a score. The chant returns in "Sam on the Roof" and the acoustic guitar statement opens "Optimus vs. Megatron", followed by a grand statement of the Heroic Theme.

This score is a bit more complex than its critics give it credit for. At the surface, it is another bold action score for a Michael Bay flick. It has a lot of elements that we\'ve heard before in previous Bay films, but Jablonsky should be commended for not simply writing a synthesized electronic score that would have been purely functional. It features an interesting blend of acoustic and electronic elements that contrast the human and robot world of Transformers. This score goes beyond that into a fully orchestral and choral work that stands alone as a fun and complex listening experience.