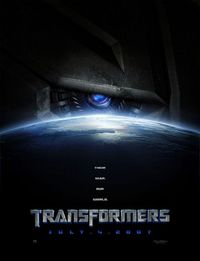 I\'ve never been a big fan of Transformers. That isn\'t to say I wouldn\'t enjoy the television show, toys, or original animated film; I just never got into it. So when I saw the new Michael Bay live-action version of Transformers, it was not from the standpoint of a long-time fan. The story is pretty straightforward. The Autobots (good guys) and Decepticons (bad guys) have been waging war against each other for a long time. The \"All-Spark\" apparently came to earth a long time ago, and Megatron (the leader of the Decepticons) came after it, because it\'s a source of unlimited power, and whoever wields the All-Spark will win the war. Thrust into the middle of this battle is Sam Witwicky (Shia LaBeouf), a somewhat gawky teen who wants to impress the hot girl (Megan Fox) with his new used car - which just happens to be an Autobot in disguise.

Soon Sam discovers that his great-grandfather discovered the secret to the location of the All-Spark, and he and Mikaela (Fox) are soon escaping from evil giant robots, and encountering friendly ones. The leader of the Autobots is Optimus Prime (voiced by Peter Cullen), and together they all try to find the All-Spark before the Decepticons can get their hands on it. There\'s a whole parallel story in the meantime involving the U.S. military, and their attempts to figure out what is going on, and as we approach the climax of the film, all the storylines converge, and large action mayhem ensues.

And let\'s be perfectly frank - that\'s what people want from this film. Michael Bay\'s films aren\'t exactly known for their character depth and emotion, and even good dialogue is rarely present in his movies. But, the man knows how to shoot action sequences that are eye-popping, and with Industrial Light and Magic delivering some amazing visual effects, this is clearly the big summer action movie. The pacing is good, and the movie never boring. The actors manage to deliver convincingly against characters that weren\'t added until post, and by the time the movie ends (with an appropriate opening for a sequel), you\'ve been through one hell of a ride.

At times, the editing and choreography is a bit overwhelming, but that\'s typical Bay territory. We get his trademarked camera moves (especially that nice 360 degree rotation when Optimus Prime transforms towards the end of the film), and the music score by Steve Jablonsky is appropriately loud and energy-driven. It\'s not clear how much of an influence Steven Spielberg (who executive produced the film) had in the end result, but there are a few moments that clearly benefited from his touch.

Transformers is poised to be the big summer movie smash that it was expected to be. Fans of the film seem to be reacting to it positively, and people who haven\'t really gotten into the whole franchise will probably find something to latch on to and enjoy with it. For me, it was the fun ride, and awesome visuals.