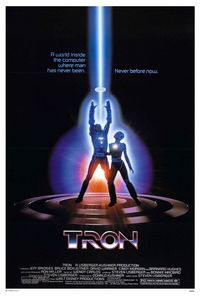 1982's Tron is a rather unique film. Released at the dawn of the personal computer era, most moviegoers were unfamiliar with the world of computing, especially the lingo.  So the idea to make a film about a guy who gets sucked into a computer was certainly rather "out there".  But the core of the story is one about a man versus the system - an underdog story.  Genius computer programmer Kevin Flynn (Jeff Bridges) never got the credit from software giant ENCOM that he was due for creating the hit video game, Space Paranoids.  In fact, he's convinced that senior executive Ed Dillinger (David Warner) had stolen his code, presenting it as his own and rising to the top of the company.  As Flynn hacks into the mainframe looking for evidence of the theft, he comes up against the rather powerful Master Control Program, the AI security system which seems to be protecting Dillinger.  When an increase in security makes it impossible for Flynn to hack in from the outside, he enlists the help of his friends, current employees Alan Bradley (Bruce Boxleitner) and Lora Baines (Cindy Morgan), to sneak him in.  But the MCP uses a laser being developed for quantum teleportation to digitize Flynn and suck him into the ENCOM mainframe.

Now in this digital world, where computer programs visually look like their programmers, Flynn is force to compete in a series of gladiatorial games for his survival.  The MCP and its leader, Sark (Warner again) have been intimidating programs into disavowing their belief in "users".  However, since Flynn is himself a user, he discovers that he has more power than the average program, and manages to escape with two other programs, Tron (Boxleitner) and Yori (Morgan).  As they travel through the computer landscape, encountering obstacles, they try to reach the MCP so that they can find the evidence that Flynn is seeking to prove he coded the hit video game.

Suffice it to say, Tron is quite a mind trip.  Once you get past the heavy level of technological jargon, you'll find that there's a pretty solid story going on.  As Flynn, Bridges is likable and it's fun to explore this new frontier with him.  The computer graphics - while dated by today's standards - were groundbreaking in their use for filmmaking, and once you let yourself get sucked into the story, you don't really dwell on the minimalistic aspects of the visuals.  It drags at times, and you find yourself waiting for the next action sequence.   The film's highlight, the lightcycle chase, is just as riveting to watch today as it was 29 years ago. Sporting a rather psychedelic visual style and a somewhat dated Wendy Carlos score, the truth is that Tron is still a niche film that would only really appeal to a certain audience. It's a product of its times, and that's not a bad thing - it just is what it is.

Tron comes to Blu-ray in a cleaned-up 1080p image that looks leagues ahead of the previous 2002 DVD release.  The stylized look for scenes in The Grid, which required shooting in 65mm B&W, and then extensive hand-rotoscoped animations, results in a bit of constant flicker on the image.  It's not distracting, it's just a sign of the times.  Similarly, while much of the CGI work is crude by modern standards, it was quite groundbreaking at the time - and to get it on film, they literally filmed a high resolution computer monitor.  The result is a bit of grain and video noise.  But don't let those fault dissuade you; this is the best Tron has ever looked, and the colors are bold, vibrant and flashy.

The audio for Tron on Blu-ray is probably better than it deserves.  It's a rather dynamic and punchy English DTS-HD MA 5.1 audio track that clearly benefitted from the remix, even though it feels a bit more front-loaded than immersive.  Some of the dialogue and source sound effects are a bit limited in their range, but there's still enough low-end to keep your home theater rumbling.  Wendy Carlos' synth heavy score uses the surrounds nicely, and although it's not a score that aged well, it sounds quite good on Blu-ray.

All of the extras for Tron have been ported over from the 2002 DVD release, with only two new supplements for the Blu-ray.  "The Tron Phenomenon" (HD, 10-minutes) has the cast and crew of the sequel, Tron Legacy, discussing their memories of the original film, and the impact it's had on their lives.  "Photo Tronology" (HD, 12-minutes) is a nostalgic glimpse at the Tron materials in the Disney Archive, as director/writer Steven Lisberger and his son Carl explore the materials that had been vaulted.

Archival supplements start off with an excellent feature-length audio commentary track, featuring director/writer Steven Lisberger, producer Donald Kushner, and visual effects supervisors Harrison Ellenshaw and Richard Taylor.  It's a highly informative track, with tons of details and trivia bits.  The banter is nonstop and always interesting, and it really gives a great sense of what it was like to get this unique film made.  "The Making of Tron" (SD, 88-minutes) is a 2002 archival documentary looking at the making of the film. It's quite extensive and paired with the documentary, one gets the sense that there is very little left untold about how Tron was made.

In the "Development" section (SD, 8-minutes), we have a few featurettes totaling 8-minutes: "Early Development of Tron", "Early Lisberger Studios Animation", "Computers Are People Too" and "Early Video Tests". Additionally, a "Gallery" provides access to designs, early concept art, storyboards, and publicity/production photos.  "Digital Imagery" gives us a look at how the "Backlight Animation" came about, the use of "Digital Imagery in Tron", an excerpt from a period television special called "Beyond Tron", and a short look at "The Role of Triple I", and a resulting antiquated "Triple I Demo" animation test.

The "Music" section (SD, 8-minutes) provides two samples of sequences where Wendy Carlos' music was dropped from the film.  Now we get to watch the "Lightcycle Scene" with the music she wrote for it, as well as the second half of the end credits suite.  Interestingly you can use this as a good reference of the Blu-ray restoration, since the SD video quality certainly shows some wear and tear on the 2002 film transfer.  "Publicity" (SD, 13-minutes) gives us four trailers, a work-in-progress reel and the National Association of Theater Owners pitch reel.  Three "Deleted Scenes" (SD, 6-minutes) are included, with an introduction by Lisberger.  A bunch of small featurettes on "Design" (SD, 3.5-minutes) explores Syd Mead's designs and Magi's animation tests for the lightcycles, and two versions of Space Paranoids game footage.  Finally, "Storyboarding" (SD, 9-minutes) explores the process of storyboarding, the main title storyboards, and provides a storyboard-to-film comparison of the lightcycle chase.

While it might not be everyone's cup of tea, Tron is a rather unique cult film. It was leagues ahead of its time, has a visual style unlike anything seen in Hollywood, and while the jargon might be dated, the story itself - an underdog creator trying to get his proper due while going up against the minions of the corporate overlords - still resonates today.  With a pretty solid visual transfer (this is about as good as it will get), and an audio remix worthy of today's home theaters, as well as a nice selection of archival extras, Tron is definitely something fans should be checking out.