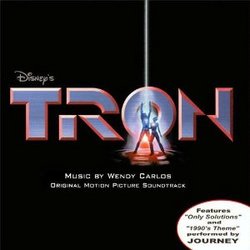 This review has been a long time in coming, due to both my procrastination, and the length of time it's taken for Tron to be released on CD (and properly on DVD). In the day, both the movie and the music were the seminal works of their time: one with groundbreaking animation and computer generated graphics and another integrating synthesized music with a full orchestra. Since its release in 1982, the movie has inspired many, from filmmakers, animators, and scientists all the way to musicians, designers, and artists. One of the more particularly innovative items from the film, the music, has been the one item languishing in obscurity. A "digital" film (in many respects), Tron had not had the advantage of releasing its music on the most popular format of today, that being a compact disc. Listeners in 1982 were treated to cassette tapes and vinyl LPs for their fix.

There were hopes of a release back in the early 1990's when composer Wendy Carlos was asked by Disney to re-master her surviving tapes for a collector's edition laser disc release. However, the only isolated example of her hard work was relegated to a section of the special features of the discs. Upon the rise of the Internet, I was able, under my own fruition, to contact Carlos's representatives and asked the status of the tapes, since Ms. Carlos has become quite expert at the fine art of "baking" master tapes. As it came to be, the Tron masters were some of the first bit of this work she had actually completed, however, there were rights issues with Disney (as it has been for many of their works by other composers for their films), and a future release was in legal limbo that would take more than a technical achievement to overcome. Fast forward a decade or so, and, according to Ms. Carlos, Disney called out of the blue about preparing a release to accompany their special edition DVD set. No sooner said than done, we have the release that is the subject of this review, which, is the same as the LP released in 1982 (in content) plus three additional tracks.

For the casual listener, one could easily write the sound off as dated, due to the over saturation of electronics in modern (if you can call it that) music. However, to fans, and aficionados of classic "electronic" music (akin to comparing CDs versus LPs), one cannot overlook the warmth that analog synths bring to the overall atmosphere of the score. An interesting item mentioned in the liner notes (and on Carlos' website), is that the score was to be split along a full orchestra, representing the "analog" flesh and blood world, and the synthesizers, representing the "digital" computer world. The only superbly discernable crossover (outside of live percussion) between the two occurs during the "Creation of TRON", a blend of orchestra, chorus, and electronics, "Miracle and Magician" and "End Titles", which occur, coincidentally when the analog human world comes in contact with the digital computer world. At times, some of the pieces are dissonant in sound, but it helps provide a transition between some of the major melodies and overt passages in the score. However, if one looks back on Carlos' entire recording career, the solo works as well as the coverage of Bach, this approach wouldn't sound as strange as it may appear.

The most recognizable themes from the score (some of which even my co-workers have a penchant for humming incessantly all day at times) are from three pieces on the album, "TRON Scherzo", "Theme from TRON", and "The Light Sailer". Although the themes that comprise these three pieces do show up earlier in the score, these tracks represent a coming together of each musical idea (in correspondence to the plot progression) that had been given birth in other areas of the film. Carlos mentioned that she had intended two thematic motifs to be used: one a militaristic sounding theme, corresponding to the MCP and it's cohorts, and a second theme, based on love story between Tron (Bruce Boxleitner) and Yori (Cindy Morgan). Although there is a "Love Theme" track, the full theme is best realized during the "End Titles" piece where every major musical point is brought to a resolution. A nice touch on that track is the addition of the large pipe organ, which really acts as a successful middle ground between the synthetic and organic elements of the score.

The 20th Anniversary DVD set is truly worth the investments if you grew up admiring the film. For those that find the CGI special effects of today as something that has become second nature, it's also a history lesson as to how far we've come since those days. In fact, I purchased the latest advance in CGI animation the same day I picked up the DVD for Tron as a comparison, which was Final Fantasy: The Spirits Within. Both shared a few central ideological themes, but other than that they are entirely different films, both in look and feel as well as the technology. Tron sparingly used CGI effects since it took so long to generate even the most simple computer animation, whereas the latter film was completely computer generated, even down to the actors within. One could only wonder what will happen within the next 20 years. As for the music, one could say it's gone backwards, from introducing electronics in the production of film scores to add something unique, to where the more popular scores are completely generated within a computer (which I have a tendency to dislike). However, for Final Fantasy, composer Elliot Goldenthal chose the classic route with a full orchestra and very little, if any electronic support. You can use Tron as a history lesson, and example of a genre, or let it stand alone as it may, but I'm sure you'll find it as fun and as interesting as I have for the past 20 years. On a closing note, visit www.tron20.net on June 18th for a sneak peak at Tron: Killer App.