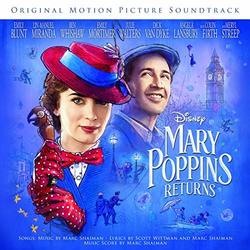 The Sherman brothers had a profound impact on Shaiman's career as both a composer and songwriter. "The movie and the soundtrack were everything to me as a child and taught me everything I know about film scoring," he says. "The songs from Mary Poppins are, in a word, perfect. The music and the lyrics are perfectly joined and have such a wonderful, sparkling yet emotional, feeling to them, so it's quite a bar to even aspire to come close to."

Because the script is an integral part of any musical, the duo was brought on board to write the music and lyrics when the script was being written, allowing the score to function dramatically from its inception. Shaiman and Wittman crafted nine original songs, each one with a soulful quality that helps advance the plot and enhance the characters. "We didn't stray too far from the sounds of the first movie," adds Shaiman. "We wanted it to feel like we were picking up where the last film ended."

The new songs include: the film's central ballad, "The Place Where Lost Things Go," a lullaby performed by Mary Poppins; the boisterous dance hall number with Mary Poppins and Jack, "A Cover is Not the Book"; "Underneath the Lovely London Sky," the opening musical number performed by Jack at some of the city's most iconic landmarks; "Turning Turtle," a spirited number performed by cousin Topsy and the Banks children; "The Conversation," a bittersweet song performed by Michael in which he tries to come to terms with his grief; and the buoyant "Nowhere to Go But Up."