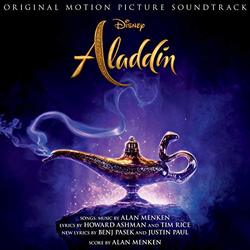 Multi-platinum and global award-winning superstar singer/songwriter ZAYN and emerging sensation singer/songwriter Zhavia Ward perform the Oscar and Grammy-winning duet "A Whole New World." The song is featured in the film's end credits and on the Walt Disney Records soundtrack, and is available as a single and music video. The new updated rendition of the classic song is produced by Saltwives aka Alex Oriet and David Phelan (ZAYN and Charli XCX) and the music video was directed by Philip Andelman (Beyoncé, Taylor Swift and Ed Sheeran).

"The selection of artists, producer and tonal direction was critical for the success of updating a classic song like this," said Mitchell Leib, president of Music & Soundtracks for the Walt Disney Studios. "ZAYN's vocals are like no other and his artistic imprint immediately brought a contemporary and diverse presence. Additionally, ZAYN could have chosen any artist in the world to collaborate with on the duet, but he personally selected Zhavia for her unique perspective, powerful vocal abilities and to platform a talented new artist, ensuring that the audience could discover this song, again, for the first time."

The timeless ballad, featuring Alan Menken's beautiful melody and Howard Ashman's unforgettable lyrics, received an Academy Award, Golden Globe Award and GrammyAward, among other accolades, upon its release in 1992.

A thrilling and vibrant live-action adaptation of Disney's animated classic, Aladdin is the exciting tale of the charming street rat Aladdin, the courageous and self-determined Princess Jasmine and the Genie who may be the key to their future. Aladdin opens in U.S. theaters nationwide May 24, 2019.

Oscar-nominated actor and multi-platinum recording artist Will Smith and Grammy-nominated superstar songwriter, producer and multi-platinum selling artist DJ Khaled are set to perform a re-invented version of the classic Oscar-nominated song "Friend Like Me." The song is featured in the film's end credit, on the Walt Disney Records soundtrack, and released as a single.  The new updated rendition of the song is produced by DJ Khaled.

The new original song featured in the film and included on the soundtrack is "Speechless," performed by Jasmine (Naomi Scott). The song is Jasmine's big breakout song in the film about finding her voice, and was written by Alan Menken and songwriters Benj Pasek and Justin Paul.