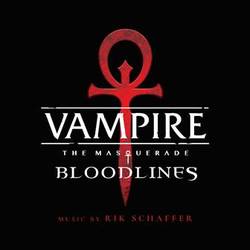 Milan Records, an imprint of Sony Music Masterworks, announces Vampire: The Masquerade - Bloodlines (Original Soundtrack) with music by composer Rik Schaffer. Available Friday, October 25, the soundtrack features previously unreleased music from the first installment of the role-playing video game, which will return for its much-anticipated second installment in 2020. The vinyl edition of the album will include a digital download card that includes both the entire album as well as eight special bonus tracks not available anywhere else.

Of the soundtrack, composer Rik Schaffer says, "Of all the games I have scored over my career, Vampire: The Masquerade – Bloodlines was the best because I was given free rein to write music without censor, and drawing from my own life experiences. This is where the best music comes from for an artist."

Vampire: The Masquerade - Bloodlines is the 2004 cult classic roleplaying game from Troika Games. Based on the White Wolf tabletop roleplaying game Vampire: The Masquerade, Bloodlines follows a character who is killed and subsequently revived as a fledgling vampire. The game depicts the fledgling's journey through early 21st-century Los Angeles as they navigate the grimy underworld of vampire politics in the City of Angels. In the ensuing years since Bloodlines initially released, it has been embraced for its world-class writing, narrative design and immersive score, and is considered one of the greatest roleplaying games of all time. A sequel is scheduled for release by Paradox Interactive in early 2020.