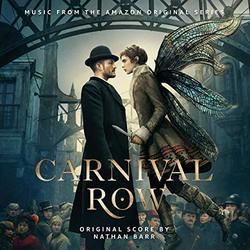 "Getting to explore the world of Carnival Row as a composer is among my most exciting musical adventures to date," said Barr. "At its core, the score is heavily thematic and explores themes of identity, love, loss and magic in a fantastical world from the past. Sometimes choral, sometimes orchestral, the music also plugs into the steam punk world so beautifully realized on screen with a variety of unusual musical instruments including a human bone trumpet, a century old Wurlitzer pipe organ, and several instruments of my own creation including a High Pressure Stout-O-Phone and a Sympathetic Drone Cello with 19 strings."

"When I received the request to work on Carnival Row, I thought at first that it might be spam mail, but I quickly realized what an amazing request I just received," said Gurdy. "I wrote several fairy-themed songs, and two were used prominently throughout the first season. The two songs were written for the character Aisling Querelle, who used to be a famous singer in the fairy world Tirnanoc. Using my interest in Irish legend, I got completely captured in my own imaginary highland fairy-landscapes, which made it strangely natural for me to write from the perspective of such a magical and feminine character. I am so flattered to have the chance to work on this amazing production. The world of Carnival Row is truly breathtaking."