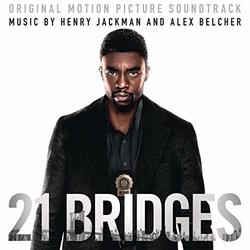 Of the soundtrack, composer Henry Jackman says, "Writing the score for 21 Bridges in collaboration with Alex was immensely fun and creatively rewarding. The fact that we, along with Brian Kirk and Joe Russo, had such a specific aesthetic in mind, made it all the more interesting. The idea was respectfully to derive some influence from the Bernard Herrman-era of film scoring and fuse that influence with contemporary composition and recording techniques. I think we ended up with quite a brave and musically opinionated result. Working with Brian and Joe was a pleasure and collaborating with Alex was also fantastic since not only was he a keen student of the original's Herrman scores, but also he is a great guitarist and bass player, with an ear for an authentic tone, all of which contributed greatly to the score."

"Writing music for film is a uniquely rewarding artistic expression," adds composer Alex Belcher. "As the composer, you act as a guide for the audience, leading them through the story and giving them information they aren't necessarily seeing on screen. Writing the score for 21 Bridges was even more rewarding because the film offered us the chance to do this sort of storytelling in a way that payed homage to some of the great film scores of the 1970's. It was, truly, a wonderful endeavor."