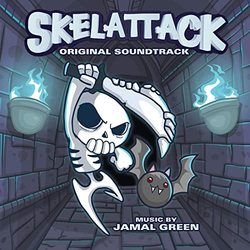 "As soon as I saw Skelattack, I Instinctively knew what sound palette I needed to create the score. Inspired by Danny Elfman's fantastic score for The Nightmare Before Christmas, I could instantly imagine the woody tones of marimbas, woodblocks and shakers to remind the audience of the hollow rattling of bones and the scraping of peculiarly pitched ribs," says composer Jamal Green of the soundtrack, adding, "The music I wrote towards the end of Skelattack's development is a lot "broader" and much more filmic and I think that gives the soundtrack a lot to offer. Skelattack has an amazing narrative and I think the music (and its creation) follows the same arch – From humble beginnings to a grand, climactic conclusion and a lot of character development along the way!"

Now available for PS4, Xbox One, Nintendo Switch, and PC/Steam, Skelattack delivers a visually-stunning, 2D action-platformer where players will jump, slash, and battle through the Underworld, tackling various platforming obstacles and puzzles along the way. The game showcases six unique environments filled with deadly charming art style and colorful, hand-drawn environments and characters.