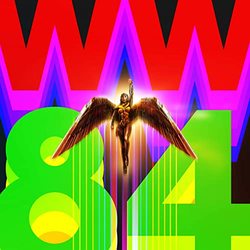 WaterTower Music is proud to announce today's release of Academy Award-winning composer Hans Zimmer's fiery and action-packed track "Open Road" from Warner Bros. Pictures' upcoming Wonder Woman 1984 (Original Motion Picture Soundtrack). The soundtrack, scheduled for worldwide release on December 16, features Zimmer's new music from director/co-writer/producer Patty Jenkins' action-packed superhero film Wonder Woman 1984. The film stars Gal Gadot in the title role, and fast forwards to the 1980s as Wonder Woman's next big screen adventure finds her riding lightning across the sky, donning wings of gold, and chasing a dream while in pursuit of two new formidable foes: Max Lord and the Cheetah. Wonder Woman 1984 will be in theaters and HBO Max in the U.S. on December 25 and in theaters internationally beginning December 16.

"Open Road" is the second track to be made available from the soon-to-be-released film. Fans now have the chance to hear it in advance of the Wonder Woman 1984 (Original Motion Picture Soundtrack), along with Zimmer's previously released track Themyscira/

Patty Jenkins discussed her work with Hans Zimmer, saying, "As someone I consider to be one of the most exceptional composers of all time, I was so thrilled to have Hans Zimmer return to the DC universe with me on Wonder Woman 1984. Not only did the film require the multiple themes that had to relate to the era of the 1980s, but on top of that, Diana, our Wonder Woman, was now unfolding into a much more complex character with many new subtle layers of emotion, most of which were radically different from the gorgeous original theme Hans had written for the Wonder Woman character.

"It was very important to both of us," continued the director, "to include and celebrate that beloved battle cry of a track that has now become so beloved and synonymous with her character, but Diana also now required a much purer and more heroic theme. And Hans provided the most mind-blowing suites of themes for Wonder Woman to now use, all related to and unfolded from his original track.

"He also gave Diana and Steve a love theme for the ages. He wrote Max, Barbara, and the Dreamstone their own extremely specific theme suite of emotional tracks that all veered from almost camp lightness of the era, to dire, to the profound and emotional.

"Hans is the perfect collaborator for the score of this film. And Wonder Woman's world of music is now filled out into a thousand shades of emotion and story. We will all be hearing the themes for many years to come."