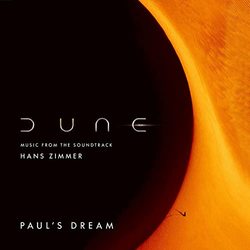 WaterTower Music is honored to announce the upcoming release of three separate album releases of music from and in celebration of Warner Bros. Pictures and Legendary Pictures' Dune, the highly-anticipated adaptation of Frank Herbert's seminal bestselling book from Academy Award-nominated filmmaker Denis Villeneuve.The film is scheduled to open around the world beginning September 15, and in the U.S. on October 22 in theaters and in the U.S. on HBO Max. All three albums feature the music of legendary composer Hans Zimmer.

Fans won't have to wait for those album releases to hear music though, as Zimmer, a lifelong Dune fan, has authorized today's release of two tracks: Paul's Dream and Ripples in the Sand.

The album release schedule is as follows:

September 3rd will see the release of the digital album The Dune Sketchbook (Music from the Soundtrack), which is comprised of extended, immersive musical explorations of the "Dune" film score. Of significant note is that this album will be released in both Standard and Dolby Atmos Music configurations, and marks Zimmer's first soundtrack released in Dolby Atmos Music – a listening technology he has wholeheartedly embraced for the music of Dune.

September 17th brings the digital album release of Dune (Original Motion Picture Soundtrack), which will feature the iconic composer's Dune film score. It, too, will be released in both Standard and Dolby Atmos Music configurations.

October 22nd is the digital release date for The Art and Soul of Dune, which is the companion soundtrack to the book of the same title, offering uniquely crafted versions of the film's main themes curated by Zimmer to accompany the reader on their journey through this visually dazzling book, which was written by the film's executive producer Tanya Lapointe and offers unparalleled insight and exploration into the film.

Knowing that Herbert's novel was as much of a passion of Zimmer's as it was his, Dune filmmaker Denis Villeneuve had hoped from the start to reunite with the celebrated composer, who collaborated with him on Blade Runner 2049, on this film and the two instantly bonded over it. "We agreed that the music would need to have a spirituality to it… a sanctified quality," explained Villeneuve. "Something that would elevate the soul and have the effect that only sacred music can. And I believe that is firmly present in Hans' score."

Zimmer, who calls Villeneuve "one of the greats," described their collaboration on the project. "I absolutely love working with Denis. He has an incredible imagination and offers so much heart and soul within the complexity of making a film of this magnitude, and our aesthetic is very comparable. Dune has always been very close to both of our hearts. The task was to figure out how we were going to interpret something we truly loved and admired, and invite the audience to come and have their own personal experience. That was, for us, the reason to make this film."

Indeed Zimmer took the approach that, since Dune was a different civilization, he would invent instruments to accompany that concept. One thing the two felt would hold true to any civilization, though, was the power of the human voice. "Denis and I agreed that the female characters in the film drive the story," explained the composer. "So the score is based on mainly female voices. We developed our own language. The musicianship is extraordinary, and this is not your normal orchestral score."

"It was absolutely beautiful," Villeneuve stated, adding that, with respect to the additional two albums, "But then he continued to write music even when the movie was finished! He was still inspired and went on writing."

On releasing his first Dolby Atmos Music soundtrack, Zimmer elaborated. "I was inspired to look at this music in a different way and to take the audience on of journey beyond the movie. To fully showcase these unique sounds and this soundtrack, I felt it must be available via an immersive technology that utilizes spatial audio. So, it was decided to deliver it in Dolby Atmos."

Dolby Atmos Music goes beyond the ordinary listening experience and puts you inside the song in a spatial way, via a listener's enabled headphones, revealing every detail of the music with unparalleled clarity and depth, so sounds seemingly come from all around a listener, similar to the audio experience of a cinema.