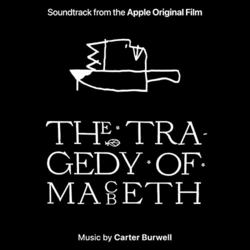 Milan Records announces the release of The Tragedy of Macbeth (Soundtrack from the Apple Original Film by award-winning composer Carter Burwell. Available everywhere now, the album features music written by Burwell for the Apple Original Film based on the play by William Shakespeare, written for the screen and directed by Joel Coen. The film is the latest in a career-spanning partnership between Burwell and Coen, whose prolific partnership dates back to 1984 and has gone on to include almost every film from the four-time Academy Award-winning filmmaker including Raising Arizona, Fargo, The Big Lebowski, No Country for Old Men, True Grit and more.

Speaking of his approach to the score, composer Carter Burwell says, "Among the ways one might play Macbeth musically are to let the witches run the show, or make Lady Macbeth a bully, or play Macbeth as a blood-thirsty madman. I did none of these in The Tragedy of Macbeth. The way Joel Coen adapted the play, and the way the actors played it, the Macbeths are human and supportive of each other. Loving even. And culpable. But the music also plays the film as a thriller. A murder sets a mechanism in motion that will unwind with greater pace and greater stakes until the end."

The soundtrack finds Burwell weaving string-heavy instrumentation with onscreen dialogues performed throughout the film, with vocal contributions by Denzel Washington, Frances McDormand and more featuring on nearly half of the album's 13 tracks. Burwell's orchestra of strings further showcase the melodic quality of the Shakespearean dialogue, of which the composer says:

"In any adaptation of Shakespeare, the language is the featured player, and Joel and I often discussed how much or little the music should play during the great monologues. We arrived at the maxim that, in these scenes, the dialogue was the melody and the score its accompaniment. With this in mind I tried to write around and below the words, placing much of the score in the lowest registers – cellos and basses – where it wouldn't fight the speech. This also accentuates the darkness of a very dark story."

The score's ominous tone is punctuated by moments of solo violin Burwell describes as "taking flight out of the darkness." Eerily alien and slightly off-kilter, these portions reflect a conscious decision by Burwell to find something "rough-hewn like a fiddle, but not a fiddle from any place we know." Burwell enlisted award-winning violinist Tim Fain to help create a folk-style sound from unknown lands, crediting the musician for his ability to go "off the page" enough to give the compositions character and life. From Shakespearean speeches to simmering, otherworldly textures, Burwell's score coalesces into a darkly foreboding and propulsive soundscape that ultimately captures the essence of the story as well as its nuances.