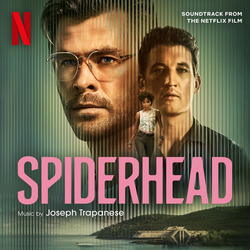 Netflix will release the Spiderhead Original Motion Picture Score on June 17, 2022 with music composed by accomplished composer Joseph Trapanese. The soundtrack is available to pre-save now on all digital service providers. A vinyl soundtrack will also be available - further details to follow. You can now listen to, Acknowledge, an exclusive track from the soundtrack.

Trapanese reunites with director Joseph Kosinski with whom he previously worked on TRON: Legacy, Oblivion, and Only the Brave. Trapanese is best known for his sleek score work for blockbuster films like Straight Outta Compton, The Greatest Showman and the Raid Series.

"Joseph Kosinski's visionary filmmaking has always demanded equally distinctive music, and I'm thrilled to reunite with Joe on Spiderhead", says Joseph Trapanese. "From the moment I read George Saunders' unforgettable short story and Rhett Reese and Paul Wernick's gripping screenplay, I was haunted by the sound of choirs, cellos, and bass clarinets, and immediately set to writing music for Abnesti's laboratory. Thanks to Joe, editor Stephen Mirrione, and music editor Bryan Lawson, these original ideas, along with the unexpected song choices, became the sonic fabric of the Spiderhead. I'm honored to share the score along with these original sketches on this album release from Netflix Music."

Director Joseph Kosinski said, "The music for Spiderhead had to express more emotions than you can fit in a MobiPak and Joe absolutely delivered. His score is as innovative and distinct as George Saunders' story."