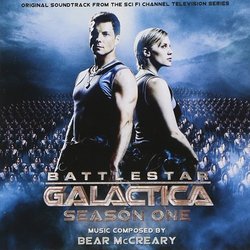 The new "Battlestar Galactica": love it or hate it. That seems to be the general fan reaction to this Sci-Fi Channel Original Series, a re-imagining of the late-70s classic. Both series tell the story of a rag-tag fleet of human beings, the only survivors of a genocidal attack by the robotic Cylons, searching the stars for Earth, the legendary last refuge of humanity. That, however, is pretty much where the similarities end. The original series was campy space-opera, part of the wave of Star Wars wannabes that popped up in the late 70s. The new series is a darker space drama, focusing on the harsh realities of being among the last 50,000 survivors of the human race.

While the differences are visually evident on the screen, they are perhaps nowhere more evident than in the soundtrack. Stu Phillips\'s original "Galactica" score evokes the sweeping heroic orchestral arrangements of John Williams\' Star Wars. However, series composer Bear McCreary, following in the footsteps of mini-series composer Richard Gibbs, provides a score for the new "Galactica" that is an eclectic and interesting blend of world-culture influenced music and highly percussive action cues, with nary a heroic fanfare to be heard.

Much of the music has a mournful quality to it, as befits a series set in the wake of an interplanetary genocide. In fact, strains of the haunting "Main Title (US Version)" are repeated in the track "Two Funerals," arguably establishing the credits sequence as a dirge for humanity. Even the action cue "Battle on the Asteroid," which, like most of the action cues is dominated by percussion, is peppered with a haunting, mournful background counterpoint, reminding us that when there are only 50,000 human beings left alive, every life is precious.

The music is highly influenced by non-Western instruments and melodies. Middle Eastern style melodies and instrumentation echo throughout the score, most prominently in "The Thousandth Landing" and "Kobol\'s Last Gleaming," a track from an episode laden with religious overtones. Celtic influences abound in "A Good Lighter," "Battle on the Asteroid," and "Wander My Friends" (complete with Gaelic lyrics). And Indian influences can be heard in "Flesh and Bone" and "Destiny". The result of these different styles is exactly what the producers desired for the show: a world that feels remarkably similar to our own, yet somehow very alien.

Interestingly, the most traditional Western-style music is found in the source music cues, primarily the aptly named "Battlestar Operatica" (and it is well worth the price of the liner notes just for the translation of these Italian lyrics), the classical "The Dinner Party" and "Passacaglia," and the disco-esque "Battlestar Muzaktica," a piece that might not have been out of place as source music on the original series. They are shockingly different from the tracks that surround them, and provide a bit of relief from the repetitiveness that is the album\'s only real weakness.

But it is the percussion that is the heart and soul of the "Battlestar Galactica" score. It dominates most of the cues, particularly the action cues, including "Helo Chase," "The Olympic Carrier," "Starbuck Takes on All Eight," and the aforementioned "Battle on the Asteroid". The pulse-pounding onslaught of drums and chimes provides a uniquely primal and highly military feel to the show. It\'s very unusual for space opera, but, as the liner notes state, the producers have set out to do nothing less than reinvent science fiction. In this case, it absolutely works. And, incidentally, I defy anyone listening to this album to avoid visualizing a group of Cylons with garbage-can lids strapped to their feet performing the music in the style of "Stomp". Lord knows I couldn\'t. The album also includes the "Main Title (UK Version)," a vocal piece that is somewhat more hopeful and less martial than the US version, though both end with the same percussion riff. If anyone knows why the change was made, they don\'t seem to be telling.

Overall, "Battlestar Galactica: Season 1" is an atypical, but highly effective, score for a science fiction program. Fans of traditional space opera scores, especially fans of Stu Phillips\'s original "Galactica" score will be disappointed if they go in expecting the usual. But the usual just don\'t fit the world of the new "Battlestar Galactica". This score does. For those who love the new show, or are willing to give this score a listen based on its own merits, you\'re in for a treat.

The new "Battlestar Galactica": love it or hate it.