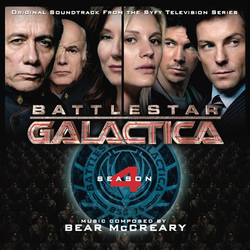 Back in March, I watched the conclusion to one of the best science fiction series ever aired on television: the re-imagining of "Battlestar Galactica". One of the many elements that made this show so spectacular was the music by Bear McCreary. Beginning with Richard Gibbs for the mini-series in 2003, the initial approach was a postmodern collection of solo drum cues and a variety of random ethnic instrumentation interspersed with a few rhythmic themes. By the end of Season 4, the style and tone remained the same, but what evolved over the span of the four seasons was a cohesive score of epic proportions that continued to build in thematic complexity over the course of the series. What we were left with by this final season was something akin to the Lord of the Rings trilogy in that rarely was there a moment where a theme of some sort could not be heard. Note that while I am a huge fan of the series, that alone is not guiding my hand in this review. McCreary's score became so essential to the series that parts of the third and fourth seasons scripts included elements for the score and, I will discuss this further later, even had a hand in the finale. This score went far beyond the usual role music has in television shows. Note: this review contains spoilers.

The soundtrack album for the final season was certainly put together with fans in mind. Like the three before it, the Season 4 album contains score highlights from both halves of the fourth season, which were split between 2008 and 2009. However, the soundtrack also contains a second disc, which is the score to the three-hour finale, "Daybreak". This addition proved to be necessary as McCreary reprised all of the major themes for the series over the course of the episode as well as composed an entirely new theme, first to parallel characters' flashback sequences, and later to become the Earth Theme. There are more themes in this series than I could count and there are ones on this album I admittedly don't know. This review will touch on some of the major themes and a few minor ones in key places. Much more detailed descriptions of themes by episode are available at Bear McCreary's website blog.

Disc 1 is presented out of episode order for a better listening experience, but each track name also lists the episode, which is quite helpful. The album opens unusually with "Gaeta's Lament" featuring Alessandro Juliani. His vocals begin solo with the orchestra slowly building behind him. An instrumental version is also included later. McCreary's use of vocals also increased in Season 4. Raya Yarbrough's well known voice from previous seasons is featured in "The Cult of Baltar" and "Assault on the Colony". A chanting choir adds to the percussive quality of "The Signal", while an epic-sounding choir rounds out "Diaspora Oratorio". Also new is the use of actors' voices in the score. In addition to Juliani, Kandyse McClure performs in "Funeral Pyre", adding an additional dimension to the tone of the show.

McCreary wrote countless themes for this series, including some that are only used for a single episode, such as the Hub theme in "Resurrection Hub". Other minor themes reappear in Season 4. Tigh's theme, heard first in "Martial Law" from Season 2, can be heard at the end of "Among the Ruins" when Ellen Tigh is revealed as The Fifth in flashback, and also in "Baltar's Sermon". The "One Year Later" piano motif also returns for the epilogue scene, "The Passage of Time." Other minor themes permeate the score and make reprisals in the "Daybreak" episode on the second disc, the details of which, again, can be found on the composer's website. Of further note is the second use of the "Battlestar Galactica" theme by Stu Phillips from the original series in "The Heart of the Sun"; the first was in "Colonial Anthem" from Season 2.

I do want to talk about the progression of a few of the major themes and orchestrations over the course of the series. First is the "Wander My Friends" theme, which became the Adama theme, first featured at the end of Season 1. This Celtic-influenced theme has had multiple forms throughout the series, primarily on bagpipes and Irish whistle. It is also one of the few themes that has appeared on all four soundtracks. "Farewell Apollo" adds a patriotic snare beat and solo violin to the mix, while "Grand Old Lady" and "Adama in the Memorial Hallway" feature short reprises of the theme with just a solo whistle. "Daybreak" introduces the final evolution of this theme, beginning in "The Heart of the Sun", but I will discuss this further below. A new use of this theme can also be heard on the Caprica soundtrack in "The Adama Name".

Roslin's theme also sees a progression in the fourth season, commonly performed in the high strings, as in "Roslin and Adama Reunited" and "The Line". It is also given a more dramatic treatment in "Laura Runs", one of my favorite cues on the album, which features a heavier orchestration in the strings and added percussion. The pattern of the melody is altered slightly as the main theme is added as a rising countermelody to pulsing strings and other percussive instruments. The Adama and Roslin themes go out together with a bang in "So Much Life". The cue opens with the pulsing offbeats of the Roslin theme in the strings, then segues into the Adama theme, almost seamlessly. Bagpipes kick in over the orchestra with the first use of the Adama B theme since the season 1 album. Piano takes over with the Roslin theme underneath the strings of the Adama theme. Roslin's theme is picked up by a solo violin, then builds into the first use of the B part of her theme since Season 2, bringing these characters' story arcs to a powerful close.

I want to say a few things in this review about is the progression of the percussion orchestrations, which I have commented on in depth in the Season 3 review. Silence was one of the major elements of the space battles in the mini-series and season 1. But even by the end of the first season, the taiko rhythms began to become more complex as the tone of the show really set in. As I mentioned in previous reviews, the taiko rhythms became more complex and varied, featuring a greater variety of drum tones (all brilliantly performed by M.B. Gordy), which also took on a more supporting role for much of the orchestrations outside of the space battles (e.g. "Kat's Sacrifice", "Laura Runs" among many others). Season 3 also saw a greater use of ethnic instruments infused into the taiko rhythms; this continues in Season 4. "Roslin Escapes" opens with a heavy backbeat and pounding taiko beneath a Japanese fue. The taiko then take on a complex solo in a very traditional-sounding Japanese style, complemented by a koto. "Blood on the Scales" continues this pattern in a somewhat less frenetic style.

The final action sequence from "Daybreak" also comes in as the longest album track yet, by far. The 15+ minute "Assault on the Colony" brings to bear the full, extensive taiko arsenal. Like "Prelude to War" and "Storming New Caprica", themes and a variety of orchestrations flit through the cue, but the taiko are front and center. The Final Four theme is used in this cue, along with brief statements of a number of minor character themes. The koto continues its percussive presence among the backbeats and bachi hits. A new rhythm comes in after the first five minutes, backed by the bagpipes and pulsing strings. This more frenetic rhythm is one of the heaviest of the series. The bagpipes have been featured in many of the large action sequences, and here McCreary gave it a particularly dissonant tone. Raya Yarbrough comes in with the "A Distant Sadness" melody from Season 3 at the start of the last five minutes and leads the orchestra to a huge climax. This huge sequence ends with statements of the Passacaglia and Final Four themes.

One other theme I want to draw attention to is the "All Along the Watchtower" theme introduced as the call heard by the final four cylons at the end of season 3. The heavy guitar orchestrations based on Bob Dylan's song follow the four to their destiny in "Daybreak", also tied to Kara's father's song and the coordinates she had in her head as musical notes. This whole sequence is unique because elements of the score were actually dictated in the script and ended up being essential to the finale. Linked to this theme is the Final Four theme. The piano from "Dreilide Thrace Sonata No. 1" links the music to Kara in "Kara Remembers" along with the Final Four theme. The Final Four theme makes its own solo appearances in "Caprica City, Before the Fall" and during the battle sequence, "Assault on the Colony". All of these themes reach their climax in "Kara's Coordinates" as multiple elements, including the Opera House, converge in the second part of "Daybreak". When the Watchtower theme returned during this scene and Kara's music was revealed as coordinates, it illustrates how essential the score was to this finale.

This of course leads to the Galactica's final jump to Earth. As I mentioned earlier, McCreary's theme for the flashbacks in the first part of "Daybreak" became the "Earth" theme for the third part. McCreary had already written the epic choral piece, "Diaspora Oratorio" for when we all thought they'd reached Earth, which is one of the highlights of the album. "Earth" is instead, an uplifting piece as the continent of Africa is revealed from space and the fleet fly over it. Here, the tone of the score shifts to the numerous reprisals of themes, some of which I've already discussed. The Earth theme permeates the last cues of the series, culminating in "An Easterly View". This cue opens slowly and quietly, then builds with a steady taiko beat, picking up a backbeat and the full orchestra with the "Passacaglia" theme from Season 1, led by the bagpipes, which then crash to a bombastic close.

Not only is the scale of this musical world impressive, but McCreary's references to past episode, past themes, past seasons, and past series is truly astounding, especially that it all fit into the 3-hour finale. This album is a must-have for any soundtrack collector.