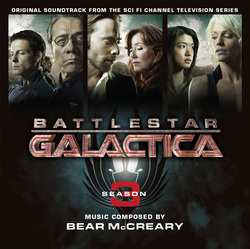 The original, minimalist approach to the musical universe for SciFi\'s Battlestar Galactica has become looser over the past three seasons as the show\'s characters, plots, mythology, and planets continue to become increasingly complex. Composer Bear McCreary\'s corpus of thematic and instrumental ideas seems overwhelming; this complexity is apparent given that the compilation soundtrack album from season three contains a maximum of one occurrence for each major theme, with a number of them missing entirely. Most notable are most of the Cylon themes, which have been on past albums and, like others, are pushed aside for new ideas from the third season. This is not a criticism in the least: the album runs less than a minute short of a full disc. Every track is significant and all this merely attests to the major achievement that is the Galactica musical universe.

There are two types of cues represented on the album, which reflect the nature of the music in the show. One type continues to expand the fusion of all types of world music into the single Galactica universe and generally stand alone on the album. The second type is comprised of action sequences and are generally dominated by taiko drum rhythms. These are sometimes laying the foundations for themes to be played over or are just pure action music. The use of the Japanese taiko drums has changed drastically from the ideas that formed Richard Gibbs\' original score for the miniseries in 2003; McCreary arranged solo taiko ensembles for the space battle sequences, keeping true to Gibb\'s minimalistic approach. In the nature of expanding the soundscape of the show and adding more complex orchestrations to the series, the action cues are vastly different from Gibbs\' score, but contain the common element of the taiko rhythms, now racing along with the orchestra and a slew of other instruments.

The "Prelude to War" cue from the second season hinted at how the increasingly sophisticated action sequences in the show would be handled musically. However, between seasons two and three, McCreary revamped his arsenal of rhythms, moving away from the heavy militaristic feel and into a more energetic, complex, and traditional Asian style. Rather than all the drums playing in unison, the rhythms are more layered, creating a frenetic feel. This is first heard in "Precipice". The opening beat is in unison, but then gives way to an acoustic guitar rhythm, a duduk theme, and a slowly building beat in the taiko. Immediately, this cue sounds different because of the incorporation of other instruments. The taiko remain in the background of this piece, adding a bachi (drumstick) strike here and there, taking over more toward the end of the cue with a number of rhythms being played at once, including the main rhythm, the bachi hits, and a constant backbeat.

"Storming New Caprica" is, of course, the highlight action cue from the third season and this is thanks, primarily to McCreary\'s new taiko writing. The heavy drums pick up the tempo and roll into the main rhythm, which is more complex than anything we\'ve heard before. The rhythm includes three unison beats and then group of taiko, some with varying tones, break off into separate rhythms. Bachi hits remain to provide the "high" notes, but multiple tones of drums can be heard here rather than just the heavy uniform beat from the last soundtrack. Just under two minutes in, the rhythms change yet again and add a bagpipe and string theme. Interestingly, some of the rhythms still sound similar to the "Prelude to War" cue, but with an added depth of complexity. McCreary also takes the taiko into some interesting variations rather than repeating the same thing. A few other percussive instruments are also added to the mix, moving further away from the pure taiko sound that had been relegated to space battles in the mini-series and season one. Toward the end of this cue, the taiko begin to play in unison once more in a restrained moment.

This sort of taiko orchestration (and these drums are orchestrated now, given the multiple layers and tones of the drums) is used in the background of other cues such as "Fight Night", "The Temple of Five", and "Mandala in the Clouds". The normal use of the taiko, as single-tone heavy beats, is used as a backing rhythm in the militaristic and patriotic cue, "Kat\'s Sacrifice". This cue also features a stand-alone theme for Kat and the Viper pilots, which is performed on the French horn and one of my favorite themes from the series. The cue is a suite of theme statements from the episode "Passage" and statements are broken up by duduk solos. This is only the second instance that brass has been used in the series, the first in the "Martial Law" cue stating Col. Tigh\'s theme. The taiko backbeat picks up toward the end with bachi hits and pounds away beneath a flute that picks up the theme briefly. Because of its unique nature, this cue is my favorite on the album, second to "Storming New Caprica".

The other type of cues on the album are those that utilize various ethnic styles and are unique to an episode or, in this case, to particular album cues. "A Distant Sadness" opens the soundtrack, featuring a dobro and Raya Yarbrough\'s haunting vocals of Armenian lyrics (translation printed in the liner notes). Yarbrough has been featured on past albums as well as McCreary\'s Rest Stop score. Her voice becomes stronger, taking on a Lisa Gerrard quality toward the end of the cue as the taiko make their first appearance on the disc. Other cues provide reprisals of themes from the first seasons, such as the Celtic Adama theme in "Admiral and Commander" and the Black Hawk Down-like Adama and Roslin theme in "Adam Falls". "The Dance" brings in an Irish jig style from the episode "Unfinished Business", which has more time on the album than any episode with the exception of "Exodus". This is because a number of musical styles were incorporated into this episode. Two cues have a very classical feel: "Battlestar Sonatica" is a solo piano sonata for Baltar\'s time on the Cylon basestar, while "Violence and Variations", also from "Unfinished Business" is a purely string cue. This seven-minute track is the opposing lengthy cue to "Storming New Caprica", and though it does not have the pounding taiko, it is no less interesting. Low strings play a dark underscore while the high strings play a general 6-note motif in a number of variations. In between these statements is a pulsating rhythm in the strings that has seen many forms over the course of the series.

The last notable unique cue I will mention here is "Dirty Hands. This was written as homage to composer Shirley Walker, who passed away in 2006. McCreary based this episode\'s score on an episode of Batman: The Animated Series that Walker had scored called "The Forgotten", in which Bruce Wayne loses his memory and is taken to an ore mine. Like this Batman episode, "Dirty Hands" featured a side of the Galactica\'s fleet we rarely see and showcases harsh working conditions on the Tylium fuel processing ship, which comes from an ore. Like McCreary, I also own the four volumes of the Batman series (along with every other Batman DVD), so I watched this episode to compare. Walker used a harmonica over a banjo and acoustic guitar to create a Western feel and some rock drums. McCreary created a similar feel with a dobro and taiko drums, paying homage to Walker while keeping the cue firmly in the Galactica universe. This cue may not stand out on the album, but given its story, it is one of the more remarkable ones.

And finally, the end of the album. McCreary hinted at a musical surprise for a few weeks before "Crossroads" aired. The score for this episode was actually written into the script, as it features a Bob Dylan song, "All Along the Watchtower". The four newly revealed Cylons spent the episode hearing a song in their head and finally met up at the end as the full song was performed, orchestrated by McCreary and performed by Bt4. Hints of the song are featured in "Heeding the Call", which is in part the instrumental version of the song, which is the last track on the album. These two cues are about as far from the original Galactica music as we have gotten, but still work really well and depict the show\'s movement in a very new direction. The heavy electric guitar-laden cue (performed by Steve Bartek) would never have fit into the 2003 mini-series, but it worked very well at the end of season three. I, for one, am greatly looking forward to Razor in November and then the final season of Battlestar Galactica starting in January. So says Bear McCreary.