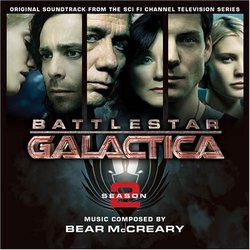 Beginning with Richard Gibbs\' score for the "Battlestar Galactic"a mini-series in 2003, the series was picked up by Bear McCreary. To date, we have had one compilation from Season One and following the stunning conclusion to the second season, La La Land Records offers a great selection from Season Two. The album opens with "Colonial Anthem" which contains themes from the original BSG, arranged by McCreary. This cue sounds a bit more "Star Treky" than the sound Gibbs and McCreary have developed for the new series, but it is a nice glance back to the show\'s origins.

The soundtrack to the second season contains a bit less space battle drum-heavy music than the first season (though extensive cues such as "Prelude to War" will certainly give fans of such cues their fill). What this album provides is a glimpse of the diversification of the music as the show\'s writers expanded the "Battlestar Galactica" universe. We saw parts of many other ships in the fleet, not forgetting the new Battlestar, Pegasus. McCreary continued the use of multiple ethnic instruments - from Japanese taiko to Celtic flutes to Middle Eastern woodwinds - to represent the mix of surviving people as the remains of the human race. "Reuniting the Fleet" returned to one of the Celtic themes from season one, which is used for the fleet and also for the Adama father/son relationship. One problem with a compilation release of selections from an entire season is a lack of thematic cohesion between cues due to the large amount of music. The Celtic theme here was introduced in the episode "The Hand of God" from season one, which appears in the tracks "A Good Lighter" and "Wander my Friends" from the first album.

McCreary also added new sounds to the mix. "A Promise to Return" and "Allegro" are comprised entirely of strings, the former being performed by the Supernova String Quartet for the farewell between Starbuck and Anders on Caprica. One unifying motif for the score is a string theme that appears in the majority of the cues and is simple, consisting of a pulsing between two notes, but is instantly recognizable through any other type of music and ethnic instrumentation McCreary might throw at you. The episode "Pegasus" also featured a new type of instrumentation, which is very heavy on the electric guitars. Every episode of "Battlestar Galactica" has a slightly different sound for it, but McCreary gave this one a distinctly varied tone, from the electric guitars to Raya Yarbrough\'s haunting vocals.

There are a number of minor themes in this show, some of which are either missing from the album or only represented once. This is due to the large amount of music written for the season and the small amount of space on the disc. Besides the Celtic theme I mentioned earlier, there is also a sub theme for President Roslin, heard in full in "Roslin and Adama" and is reprised in "Roslin Confesses". This theme is remarkably similar in sound and style to "Leave No Man Behind" from Hans Zimmer\'s Black Hawk Down. McCreary\'s use of the electric violin and piano make yet another new tone for the show; this is one that I actually remember hearing it when watching the episode the first time. Another small theme is from the episode "Fragged" and is a slow tune in the horns with militaristic percussion behind it and is one of the highlights of the album because the brass are used so infrequently.

This brings me to the action music. Dominated by taiko and a number of other percussion effects, space battle scenes, for those featured here namely "Scar" and "Prelude to War". "Scar" features a very complex set of drum rhythms beside the taiko. Various rhythms in the taiko over the past two seasons and the mini series also can be considered minor themes, though most relate to space battles. "Prelude to War" builds with the taiko and then the string theme comes back over the drums. The taikos pound to a dramatic finale with a very distinct rhythm for this particular conflict in the show.

The music for "Battlestar Galactica" is great because, like the show, it is vastly different from anything else. This soundtrack for the second season is just a scratch on the surface of the music written for the show, but it is great to have access to some of the best cues. Some tracks, particularly "Something Dark is Coming" probably could have been shortened, but overall, the eclectic collection of cues represents the varied styles of music for the show quite well. The album ends with the much loved shortened season two main title and the cue "Black Market", which features Steve Bartek on guitar. I have no idea where Season Three is going and I cannot wait to see where McCreary takes the music in the show\'s footsteps.