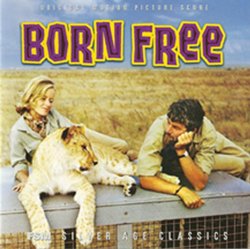 The last time I saw Born Free must have been when I was 8 years old. I've heard the film's song (as sung by Matt Munro) countless times since then, whether in parodied television commercials, piped-in mall music, or the easy listening station that the dentist plays in his office. Perhaps in a culture as deeply rooted in the notion of "catchy theme songs" as ours is, there are worse forms of immortalization—with company like Maurice Jarre's "Lara's Theme" for Dr. Zhivago, and the Godfather waltz. (Though even as that particular musical Valhalla has been as recently joined by James Horner's (in)famous Titanic love-ballad "My Heart Will Go On", the listener may determine whether this is sublime or otherwise. My point is this: sometimes the song gets in the way.

A song will so deeply captivate the appeal of the public that sometimes the listeners don't hear anything else. Perhaps that sells records, yes, (good thing!) but in so many cases, what is easily forgotten is the music that is overshadowed by a single 3 minute track. With John Barry's Born Free I, too, had forgotten how wonderful that music can be.

The James Bond legacy not to be disregarded, John Barry's work outside the popular action-adventure franchise is quite remarkable in its' own right. FSM's latest release of Born Free allows fans to experience the richness of Barry's score, which is alternately playful, pastoral, haunting and suspenseful, with a touch of African flavor, and the easily gushing romantic style that is a John Barry trademark. Despite the title song, which may be inextricably associated as a pop hit of the 1960's, Barry's score never comes off as "dated", which should make this an easily accessible score for even the most discerning of long-time listeners, as well as film-score newcomers. FSM has done an excellent job with this release, and the album is a worthy addition to any music library, film score or otherwise.