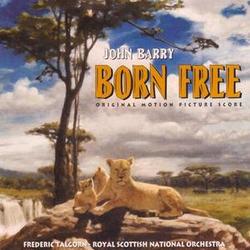 by David A. Koran May 11, 2000
3 / 5 Stars
Ahh, to hark back to a time when one of the best composers in the business what at his prime and had no fear of being replaced or walking off a picture. With Varese's re-recording of maestro John Barry's inventive, broad and gentle score to Born Free, we're given that glimpse of a time long forgotten. This CD, with Frederic Talgorn conducting the Royal Scottish National Orchestra, we hear the best cross-section of John Barry in all of his styles than almost any score he's ever written. It's also not exactly the type of score that would be written if the same film was produced today. If it was done today, the filmmakers would try to over-Africanize the score, while Barry at this time (1966) kept it strictly in the pop-symphonic range that he was known for at the time, and in turn helped him garner his first Academy Award and Golden Globe,

I've had the opportunity to listen to original soundtrack recording, which has since been long out of print, and I think that Varese's re-recording is okay. It has a much better sound than the original, which can be attributed to the newer recording technologies. Overall, Talgorn has stayed true to the pacing and sound of the original, enough so that you could consider this a fitting replacement for the out-of-print version. The themes, like on the original, are quite repetitive after a while. It's a nice theme, but how many times can you rearrange it and still make it sound fresh. The main problem I had getting through the album (both versions) was that it was boring. Granted this is one of the first times were Barry used some of his musical thematic conventions that would later appear in his work on Out Of Africa, Dances With Wolves, and a slurry of James Bond films. Barry's brass arrangements are the prototypes to many of his mid-series James Bond scores and his take on strings and percussion reminds me of the "landscaping" cues from Dances With Wolves.

On the original soundtrack, John Barry teams up with Matt Munro (Thunderball) again for the title track on Born Free, which was originally removed from the film's soundtrack. As Paul Tonk.'s liner notes specify, that due to a cover version of the main title theme by Roger Williams went to the top of the U.S. charts, this version with Munro was re-instated back into the soundtrack of the film. On the Varese release, this isn't there, but, there are several more cues that didn't appear on the original release. A kind of "tit-for-tat" exchange, if only to get a complete representation of Barry's work on the film.

If you want soothing music that will put you to sleep, this will do it. I do see a reason for a re-recording of Barry's early orchestral work, and his first award garnering on at that. Much of this album has to be viewed in retrospect to the career that came after this score was done, which spans over thirty years. As an anticipated and exciting release, it is not. I'll reserve that for the similarly timed release of Bernard Herrman's Citizen Kane, which coincidentally was his first film score but also the first of his to get recognition via an Academy Award nomination. When it comes to anticipation of soon to be released works of John Barry, I look forward to the Bond re-issues or maybe even his sci-fi opus, The Black Hole. I would hope that this isn't the start of looking at a past career, but one that has a few more great scores to come.