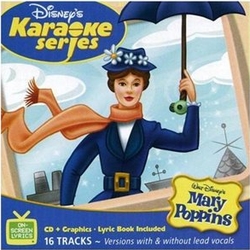 What better way to really show your appreciation for such classic songs as "A Spoonful of Sugar" and "Step in Time" than by crooning them yourself for your family and friends?   The latest in the new Disney Karaoke Series of releases, Mary Poppins Karaoke gives us eight songs from the film, in two flavors: with or without vocals.  As with the previous karaoke discs, the vocal versions are not the original singers; rather, they are newly produced vocal tracks to show you "how to sing properly".

Unlike the rather disappointing Aladdin karaoke disc, the orchestral material comes from the original source recordings!  That's right, finally we have a music-only version of the songs from the film.  (I just hope that if and when Disney does The Nightmare Before Christmas, they go to the original music stems as well.)  Richard Sherman explained that the main reason to record the music separately from the orchestra was so that when it was dubbed into foreign languages, it would be easier to mix.  Additionally, this allowed them to make any musical modifications and orchestral tweaks right up until the end.  So, pop this disc in, and try your hand at "Supercalifragilisticexpialidocious".  It's worth a shot, and for $9, it's worth it!