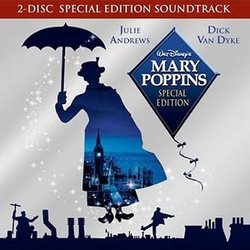 The original Mary Poppins soundtrack was released on Walt Disney Records. It featured songs from the film, and an interview with the Sherman Brothers discussing their work.  Now, for the 40th Anniversary of the film, a special two-disc release has been prepared.  While it doesn't contain every note of music from the film, it certainly has enough to keep the average fan satisfied.

The first disc contains the music.  Songs and score run a full 80 minutes long, and compared to the original release, there are no new songs included – however there is now over 25 minutes of previously unreleased score, and some of the songs even have slightly extended material.  The music quality is quite good for a 1964 recording; there is very little in the way of hiss or distortion, and stereo separation is quite clear.  "Randy Thornton, who recreated the soundtrack, found the original underscoring by Irwin Kostal, who was a hero with this picture," said Sherman.  "You hear a lot of his subtle mixing of the songs, and how they work and the instrumentation is so glorious."

The second disc contains dialogue-based extras.  Much like the 2-CD release of Star Trek: The Motion Picture, the second disc will only appeal to people willing to sit through audio of people talking.  For forty-minutes, we get to hear Story Meetings with author P.L. Travers discussion what she does and does not like (or want) in the script.  It's actually pretty insightful, and you can see where Travers decided she didn't want them to stray from her story.  When asked about Mrs. Travers' thoughts on Mary Poppins as a film, Richard Sherman told us, "Mrs. Travers never was too happy with the picture.  It's a funny thing – she never quite understood that we didn't have a story.  We had a lot of little incidences, but no reason for Mary Poppins arriving and leaving.  So we had to create a dysfunctional family – the father is so busy with work, and the mother is busy with her cause as a suffragette.  And the symbolism in "Feed the Birds" is that it doesn't take much to be kind and give a little of your self.  It doesn't cost anything to do that, and means so much to everybody, and so much to these children.  As soon as the father learns this lesson, and he takes them out to go fly a kite – that's the lesson that Mary Poppins taught the family. So she achieved her mission, and she left."

Also included is the original Hollywood Spotlight Microphone, a 18-minute long interview with Julie Andrews, Dick Van Dyke, the Sherman Brothers, and Irwin Kostal, talking about the music in the film.  Interestingly, Julie Andrews comments on how many movie-musicals come from the stage, yet, Mary Poppins does not – and how it would be nearly impossible to adapt for the stage.  SoundtrackNet spoke with composer Richard Sherman about this.  "It's a wonderful exciting thing.  What they did was take the form of what we did for Mary Poppins, and about nine of the original songs, a lot of the situations, and added new stories and songs.  It's produced by Thomas Schumaker, and Cameron Macintosh.  So we're in great hands – they're wonderful producers and know what they're doing.  Robert and I did not write the new songs – it was done by some great writers, Anthony Drew and George Stiles.  They wrote it in the period we wrote our original stuff in, and it all blends – it feels like one team did the whole thing.  The reason they wrote it was that Mrs. Travers had mandated that British people would be involved – it couldn't be done by Americans!  She didn't want us to have a run-on-the-bank.  She didn't want a lot of the things we did in the film to be in any stage production.  So it's a transformed, but brilliantly done version of Mary Poppins.  It's still our formula that we slaved over 45 years ago, and it works beautifully!"

Finally, the album closes with the same Sherman Brothers interview that was on the original CD release.  This two disc set serves as a nice tie-in for the 40th Anniversary of Mary Poppins, and while it is by no means a "complete" release of all of the music recorded for the film, it will satisfy almost everyone who wants to enjoy the great songs and music from this classic film.