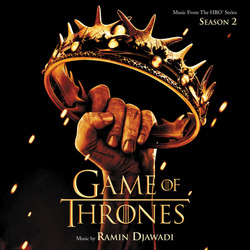 The cold winds are rising. Storms come and go. The big fish eat the little fish. Sometimes those with the most power have the least grace. The war of five kings ... nothing matters but how it ends.

The theme and score from Game of Thrones became a huge success. The main title visuals and music were even adapted into the opening credits of a recent episode of The Simpsons! Composer Ramin Djawadi (Iron Man) returns from the success of Season One to score the bigger-in-every-way second season of this epic fantasy franchise.