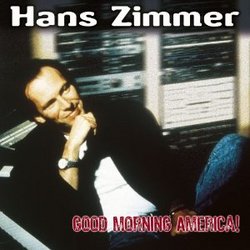 This second of two early Zimmer compilations released by Milan Records presents cues from five scores of his from 1991 to 1996. This five year period has more to choose from than The British Years and the cues that made the cut of the album are a bit surprising. To begin with, this album is over 20 minutes shorter than "The British Years". While the time that the score selections span covers such masterpieces as Crimson Tide and The Lion King, these are not included. While the goal might have been to present some of the less popular music of Zimmer\'s, such as Broken Arrow, it probably has more to do with what albums Milan had the rights to.

That having been said, this is an excellent compilation of cues from Zimmer\'s early work in America. Mainly from films in the action genre, "It\'s a Boy" from Nine Months is a bit out of place, but is a nice extensive cue from Zimmer\'s romantic comedy side. This album also represents an era where Zimmer experimented with sounds, creating a fusion between synth and orchestra, of which Backdraft is a prime example. "Hate" from Point of No Return deserves its place on this album as a score very few people know, but is a very fun listen, with a powerful theme coming in at the end.

This brings us to Beyond Rangoon. To date, this remains one of my favorite Zimmer scores. Now out of print and extremely hard to find, the ten minute finale cue from the original soundtrack is a required choice for this compilation. Taking a nod from Zimmer\'s previous score for Black Rain, he uses ethnic flutes over electronic percussion in a drawn out performance of the main theme, like what he did for the "Cameroon Border Post" track in Tears of the Sun. Due to its length, this is the one cue on iTunes that is "Album Only" but it is worth the price (and the other cues are good too). The album closes with two cues from Backdraft, which has been re-released on CD and is another of Zimmer\'s best from the early 1990\'s. It is a nice conclusion to the compilation because it is one of Zimmer\'s first use of a full orchestra for an action score. For new fans of Zimmer\'s newer work, these two new compilations would be good to look into if you can\'t find some of the original album releases.
more reviews by Mike Brennan
Rate this Album
Missing Information?