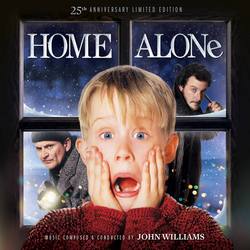 For this deluxe release, produced by Mike Matessino and Nick Redman, and executive produced for Sony Music by Jeff James and Didier C. Deutsch, producer Matessino worked with newly discovered elements (2'' scoring masters containing 3-track mixes), which he transferred, mixed and mastered at high resolution (96k/24bit). The result is a strikingly sonically improved presentation of the score above and beyond any other Home Alone soundtrack release.

Disc One contains the film score, with additional music, and Disc Two presents the re-mastered original 1990 album presentation with bonus tracks, including the addition of two tracks recorded for the film by Southside Johnny Lyon and the songs "Run Rudolph Run" and "Rockin' Around the Christmas Tree." With revised in-depth liner notes by Matessino and joyous all-new art direction by Jim Titus, this is the definitive release of a holiday classic from one of filmdom's greatest and most beloved composers.