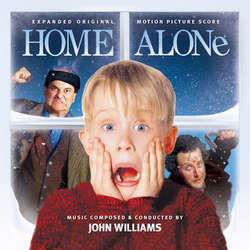 Produced by Nick Redman, Mike Matessino and Didier C. Deutsch, through arrangement with Sony Music and 20th Century Fox, and remastered by Mark G. Wilder and Maria Triana at Battery Studios, this expanded release arrives just in time for the film's 20th Anniversary and features more than 20 minutes of previously unreleased music, including bonus tracks. Exclusive, in-depth liner notes by Mike Matessino take you behind-the-scenes of one of filmdom's most indelible holiday scores.

This release is limited to 3500 Units. Art direction is by Jim Titus (Unstoppable, Human Target).

A note to completists: The recordings of "Have Yourself a Merry Little Christmas," "Please Come Home For Christmas" and "White Christmas," which are included on the 1990 soundtrack album for Home Alone, were not available for license.