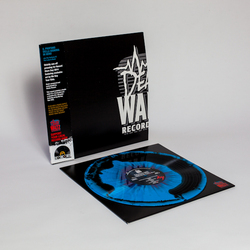 Never before released score remastered from the original master tapes.

Death Waltz Recording Company is proud to present another masterpiece from Italy, with Nicola Piovani's gorgeous score to Francesco Barilli's highly-regarded psychological horror Il profumo della signora in nero. The tale of a successful career woman who suffers a downward spiral into a treacherous mental breakdown, the film has been favourably compared in some quarters to Roman Polanski's Repulsion, thanks to a star turn from leading lady Mimsy Farmer and Piovani's beautiful yet unnerving music. The score is perhaps less telegraphing than you might expect—at least initially—with the core being a stunning melody that will remain in your head for months.

First performed in a classical style, the theme is reprised in many stylistic variations throughout the score, from a straightforward rendition that seems almost naively innocent, to lush pastoral reprisals, and even a big band version. Piovani uses the theme almost as a comfort zone, a false sense of security, before jarring the melody with piercing strings and harsh percussion to make you bolt upright. The score is haunting in places, with surreal melodies that almost sound like whalesong and a slow piano piece that perhaps had an influence on John Carpenter's Halloween. A mesmerising experience that remains a highlight of Italian film music.


Shrinkwrapped, Embossed & Debossed Death Waltz Recording Co. exclusive RSD sleeve with Obi strip featuring a 36 x 36 poster and a double sided 12 x 12 art print by We Buy Your Kids exclusively for this one off release.