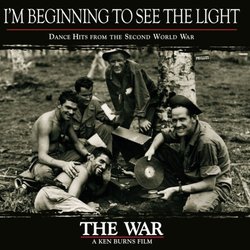 I'm Beginning to See the Light: Dance Hits from the Second World War

Running about 15-hours long, Ken Burns\' documentary series The War looks at the second world war from the perspective of four American towns. A soundtrack album barely scratches the surface of the music used in the film, and three supplemental albums released help flesh out the pieces a bit more. I\'m Beginning to See the Light: Dance Hits from the Second World War is the most upbeat of them, featuring 20 classic jazz, swing and big-band numbers that will entertain and delight.

The sound quality is pretty good considering the sources - most of the tracks are in mono, and there is some hiss, but that\'s expected. The final piece, Goodman\'s "Sing, Sing, Sing" is the long version, running over 8.5 minutes long, and is nearly impossible to beat. It\'s literally one classic song after the next, and it\'s certainly one of those "feel-good" albums that is sure to lift your spirits.