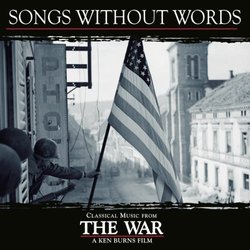 Songs Without Words: Classical Music from The War

Review: Songs Without Words: Classical Music from The War

Running about 15-hours long, Ken Burns\' documentary series The War looks at the second world war from the perspective of four American towns. A soundtrack album barely scratches the surface of the music used in the film, and three supplemental albums released help flesh out the pieces a bit more. Songs Without Words: Classical Music from The War shows how Burns was able to use classical music to work as underscore, allowing both contemporary 20th Century composers as well as some classical writers to provide the gravitas necessary to showcase the emotional toll of battle.

From the heavy emotion of William Walton\'s "The Death of Falstaff" to Dvorak\'s "Cello Concerto in B Minor" to Elgar\'s "Nimrod from Enigma Variations", the album is slow, usually depressing, and very somber. The performances are all excellent, and include Benny Goodman on clarinet, Yo-Yo Ma on cello, Aaron Copland conducting the New Philharmonia Orchestra, and Leonard Slatkin conducting the London Philharmonic Orchestra. (Not all at the same time, of course.) There is even a piece by Gyorgy Ligeti ("IV. Lamento, Adagio"), which is somewhat difficult to listen to because of the atonal dissonance that he excels at, but the mood it creates is perfect to accompany the horrors of war.

Songs Without Words: Classical Music from The War is full of excellent music and performances, but the compilation doesn\'t really hold up as well as you\'d hope. It feels more like a series of disconnected pieces that only serve to sober you up, and bring you emotionally down.