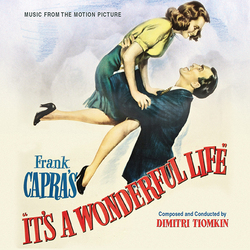 It's a Wonderful Life - Original Score

Dimitri Tiomkin wrote a wonderful score for It's a Wonderful Life, interweaving original themes and quotes of popular music to great effect. But, as sometimes happens, Capra made lots of changes in the editing room. He cut several cues (letting those scenes play without music) and rearranged where certain cues appeared; he removed sections of cues, and even tracked in music written for other films. But the score as written is exquisite—as heartfelt and moving as the film. And even though the way in which it's used in the movie works beautifully, hearing it complete (including unused cues) is a special treat. It is filled with Tiomkin's wonderful sense of film and character and drama.

This is, surprisingly, the world premiere release of the original tracks for Tiomkin's score. Tiomkin had a set of acetates for the film, some of which were in good condition and some of which weren't. They were filled with partial takes, aborted takes and full takes. Through careful editing, we were able to piece together everything that was provided to us and Chris Malone, our restoration expert, did a breathtakingly great job on it. Once before he saved for Kritzerland a score many thought could never be released—A Place in the Sun—and his work here is even more astonishing, resulting in close to fifty minutes of pure Tiomkin heaven.

While a handful of cues are still a little problematic in terms of acetate noise, the majority of them have been cleaned up without sacrificing any musical or recording qualities and are quite stunning to hear. We have also included several interesting bonus tracks. Do not be fooled by any other CDs that purport to be the original soundtrack for this film—they are all bootlegs and contain dialogue, sound effects and music right off the film itself. This is the first release of the real deal.

And so, at long last, here are the wonderful original score tracks to It's a Wonderful Life. This release is limited to 1200 copies.