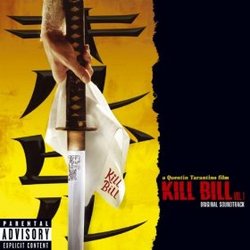 In the spring of 1996, while Pulp Fiction fever was still around, a friend told me, "the coolest thing about being Quentin Tarantino is that he gets to make everyone else listen to his personal music collection. "There have been more than a few influential film soundtracks in the nineties (The Crow, Trainspotting, The Saint, The Matrix), but no album or albums had more influence over film soundtracks than the one-two punch of Pulp Fiction and Reservoir Dogs in 1994. Sure Dogs came out in 1992, but 1994 was when everyone started listening to it.

To Tarantino, the pop tunes are the actual score of to his film: half-remembered hits from the 60's and 70's, quirky B-sides and forgotten film scores mixed in with cool monologues from the films. No genre was safe; R&B, rockabilly, surfer-rock, kitschy blaxploitation tunes. The albums were like an indelible mix tape, and every soundtrack under the sun was soon imitating its style, whether Tarantino was in the movie or not (Desperado, Boogie Nights, From Dusk Till Dawn, Magnolia, Out of Sight, ]Ocean's 11, Clerks).

The eagerly awaited album to the "4th movie by Quentin Tarantino", Kill Bill Vol. 1 no longer has the punch or surprise that Pulp Fiction and I don't think anyone, including Tarantino expected it to. The fun of the album is that he simply does what he always does, which is to compile quirky music which he thinks is "cool."

As a change from previous albums, the movie quotes are kept at a minimum. Additionally, a majority of the songs are more instrumental in natural. The music is an even more eclectic mix where you have no idea what genre the next song is. Listening to this CD before watching the movie, I was wondering how on earth is this going to fit together? Having seen the movie, it is a rock-n-roll spaghetti western. Like what a Sergio Leone movie would be if he had a great music collection.

The album starts with the surprisingly somber Nancy Sinatra song ("Bang Bang," "My Baby Shot Me Down"), which becomes the Bride's (Uma Thurman) theme underscoring her inner sorrow and giving the movie a serious undertone that previous Tarantino films have not had. It's not a Tarantino Album if there isn't a rockabilly song ("That Certain Female") or an obscure 1970's pop hit ("Don't Let Me Be Misunderstood"). There is an emphasis on Japanese music, understandable as a good portion of the film takes place in that country. Meiko Kaji's "Flower's of Change" is a 60's Nippon style ballad. A Japanese B-52s, the retro band 5.6.7.8's makes a cameo in the movie as the band playing at the House of Blue Leaves. Only one their songs ("Woo-Hoo") appears on the album and it will drill a permanent place in your brain. The Tomoyasu Hotesi song used in the film's trailer ("Battle Without Honor or Humility") is here too.

The RZA score blend in quite well as they are a hodge-podge of hip-hop styles mixed with old kung fu stings. "Ode to Oren Ishii" is the highlight. "Ode" takes music from the Bride's attack on Buck (Michael Bowen) and lays in Blaxploitation vocals, which is too bad because the music was the better part of the piece.

The most unique aspect about this album is how much score has been pulled from other films. Music from Ironside is used as the Bride's revenge motif, which flares up with a red-tinged flashback whenever she's in the company of her next target. There's the absolutely rocking "Run Fray Run" from the Isaac Hayes film Truck Turner (1974) and Al Hirt's amazing cover of the "Green Hornet" theme. Bernard Herrmann's whistling theme from Twisted Nerve (1968) is used in a Brian DePalma homage. Multiple Ennio Morricone-esque tracks are taken from a little known Lee Van Cleef Spagetti Western, Il Grande Duello (1972), though unfortunately, only Luis Bacalov's "The Grand Duel (Part Prima)" is on the album. This makes me want to track the original soundtrack down. Damn you, Tarantino!!!!

I would give this soundtrack a higher rating if they had only done one thing: rearrange the order of the music. From Track 18 on, the album has a series of Kung Fu effects sound cues. They are all cute and endearing in a kitschy way, but played all in a row dilute their effectiveness. My suggestion is that they should have arranged these cues throughout the album as filler between songs and ended the album on the perfect note ("You're My Wicked Life"). Good thing CD players have that "random" button.

To no one's shock, the album feels incomplete as the rest of the Bill Killing will occur next year. But within this one half, Kill Bill Vol. 1 is more satisfying that most "complete" soundtrack albums this year.