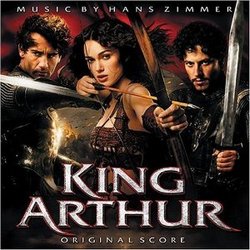 Upon his return to action scoring with King Arthur, Hans Zimmer has created a fusion of two of his common genres: historical drama and action/adventure. Despite the film's criticism about its historical accuracy and general storyline, at base value (i.e. without expecting it to be yet another version of the Arthur legend), King Arthur is a visually stunning and exhilarating action film. Zimmer walks a fine line between rehashing either the action scores he became well known for in the late 1990's and the more recent historical films he has scored recently, such as Gladiator and The Last Samurai. The result is an action score fused with Celtic and Roman elements to create a soundscape that, even on its own, captures the feel of King Arthur.

The album begins with a song written by Zimmer and performed by Clannad's Moya Brennan, who also provides vocals for parts of the score. "Tell Me Now (What You See)" is an appropriate song—which is played over the end credits—because it is performed by a Celtic vocalist and uses Zimmer's main theme, unlike some songs that accompany scores (i.e. Pearl Harbor). While the Celtic influences are not as great as in some of James Horner's work, Zimmer does mix in certain elements to the score. Interspersed with the action music, pounding percussion, and broad brass statements of the main theme are solos by various ethnic instruments such as the bagpipes, duduk, and violin. Martin Tillman's electric cello, which is prominent in many of Zimmer's recent works (Black Hawk Down, Tears of the Sun) can also be heard at the beginning of the final track on the album, "All of Them."

The score begins with the main title of the film, which opens onto a moving shot of Britain's hills; it is a tremolo, moving string line with brass and chorus chords leading up into the first statement of the main theme by the French horns. The theme is not one of Zimmer's most memorable ones, but he uses it in a different way. The theme is not purely in the progression of notes, but a percussive rhythm that accompanies it, either by the strings or the drums. Both the notes and the rhythm are varied throughout the score and together make one of Zimmer's more versatile and interesting themes. The opening of "Woad to Ruin" (a pun on the Celtic tribe name) segues into an 11.5 minute track that includes the brief prologue and the Samaritan knights' rescue of the bishop up through their arrival at their outpost along Hadrian's Wall, which is the first full statement of the main theme.

The rest of the score ranges from pounding action music to beautiful horn and string solos. Critics of Hans Zimmer's work will be pleased that there is no variation of his "Journey to the Line" motif from The Thin Red Line, which made varied appearances in Pearl Harbor and The Last Samurai. The score actually sounds more like Crimson Tide and Peacemaker at times than Gladiator, (this may be partly due to the involvement of Nick Glennie-Smith) with a male chorus and some gorgeous French horn solos. These appear most in the best track of the album, "Budget Meeting", which also features some of the best action music Zimmer has written since 1997's Peacemaker.

Some of the music—mostly that associated with the Saxon invaders ("Do You Think I'm Saxon?")—is not as good as the rest of the album, but the track is easily skipped. I also would have liked to have heard a Celtic motif for Merlin or the Woad tribe, but they were in the film so little, it probably wasn't worth it. I was very happy to hear Hans Zimmer return to some of his earlier action styles, while integrating some of his newer tricks. Some portions of the score containing solo horns or male choirs are reminiscent of Crimson Tide, one of his best works to date. The performances and recording of King Arthur are crisp and the tone of the music is evocative of the harsh times of the Dark Ages as well as the stunning visuals of Britain's countryside and Arthur's noble presence. The album closes with "All of Them," which returns to the moving string line that opened the film in the last few minutes of the ten minute track. Here, Zimmer brings in all the elements from the score—chorus, brass, string line, and the percussion rhythm with the full main theme in an upbeat cue that ends the album wonderfully. Definitely a must-have.