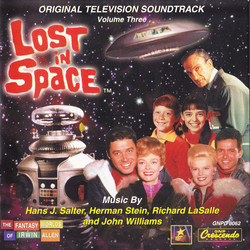 Following the success of "The Fantasy Worlds of Irwin Allen" boxed-set GNP Crescendo opted for a seventh volume, a third volume of music from "Lost in Space." Showcasing the scores "The Derelict" by Hans J. Salter, Herman Stein & Richard LaSalle, "My Friend Mr. Nobody" by John 'Johnny' Williams, and an unused second season 'Main Title' by Warren Barker, the disc is an appropriately spacey collection of music from the series.

"The Derelict" combines consonance with dissonance and everything in-between. But the effect, coupled with the episodic nature of broadcast television scoring, is surely an acquired taste. It is an interesting score and very skilled, but much of it is not the sort of music one might care to hear repeatedly. Screeching horns, wandering motifs, jolly marches, and shrill woodwinds interfused in a more (dare I say it?) romanticized backdrop make for moods that are not always as unified from one creative perspective as they could be, perhaps the result of having three composers plus the inclusion of Williams' first season 'Main Titles' & other themes. Nevertheless, it is an engaging listen that rightly speaks not only for the episode but also for itself. "My Friend Mr. Nobody" is a consistent score demonstrating that the composer does in fact know how to write a full score for an orchestra containing less than 80 pieces. This portion of the disc is its pinnacle, representative of many of the best things about "Lost in Space." The music furthermore possesses several of the qualities John Williams aficionados know and love, such as skipping flute passages, rolling cello, Herrmann-esque violins, and especially Williams' trademark brass writing. It is generally a darkly flavored composition, brightened by some playfully melodic elements and a thrilling building intensity indicative of the composer's able work. The underscore then finishes with the first season's 'End Credit.'

The music ends with the understandably rejected theme for the second season... Barker offers musical jokiness so out of place that the Robinson family no longer seems quite as lost. (My copy of the disc also has an unlisted final track containing what I assume is a variation on John Cage's "Four Minutes, Thirty-Three Seconds.")